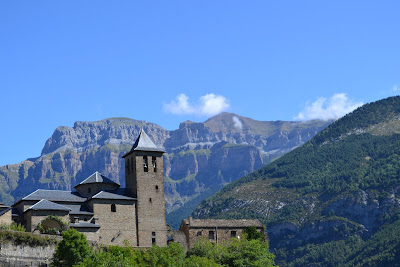 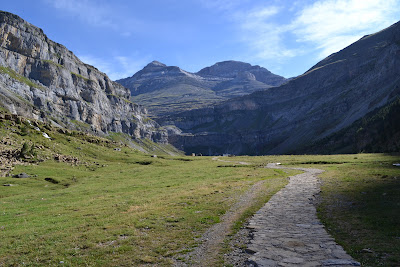 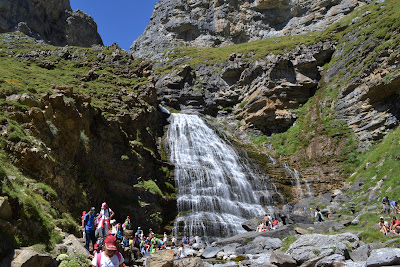 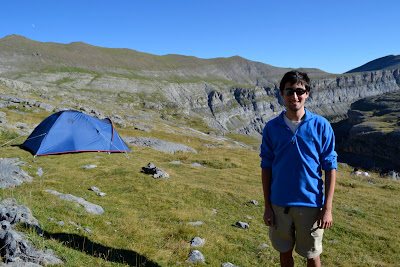 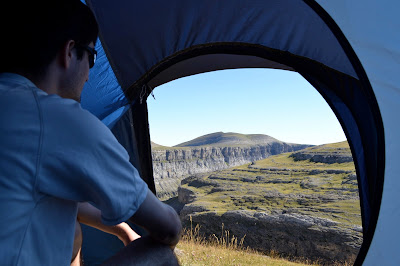 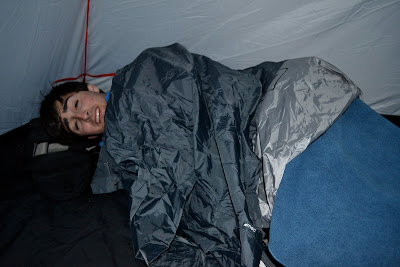 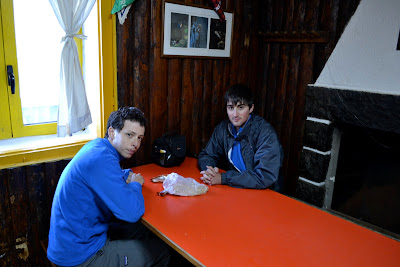 Thawing out in the refugio the next morning. Note the matching fleeces.
Posted by Ben Gittleson at 9:40 PM No comments: 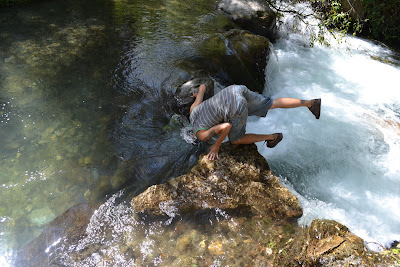 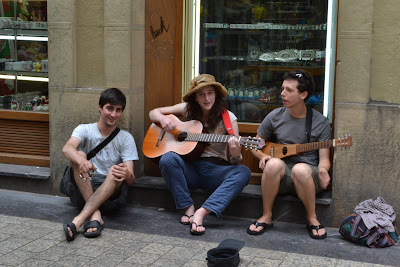 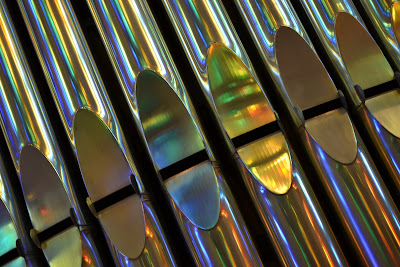 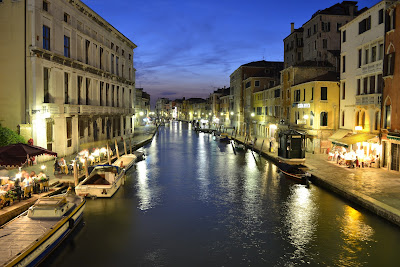 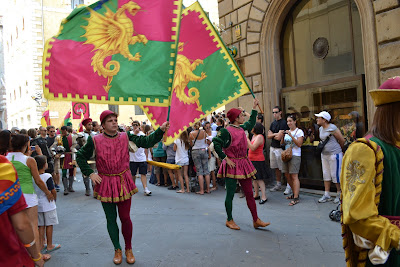 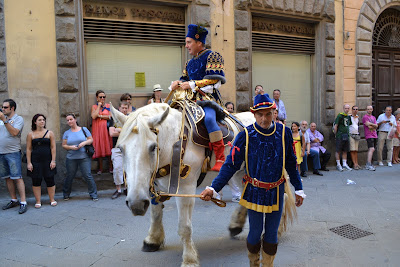 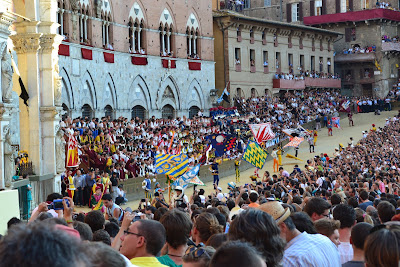 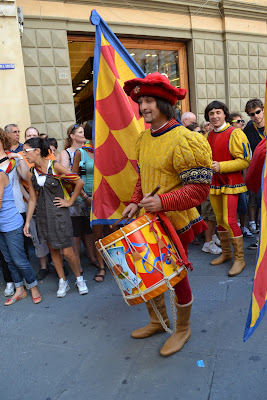 And happy birthday, Mom!
Posted by Ben Gittleson at 2:32 AM No comments: 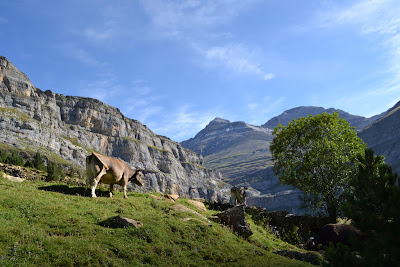 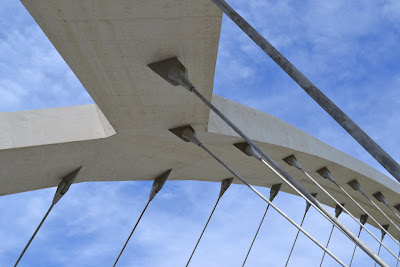 Hola from Zaragoza, Spain, or a random, surprisingly large city that we accidentally found ourselves in thanks to weird bus schedules.

We've been having an awesome time in Spain is sweet for a variety of reasons. Top three:
Here's what I've been up to over the past two weeks:

Madrid
I arrived in Madrid and immediately wandered into Spain's Tahrir Square, Plaza de Puerta de la Sol. There's a makeshift tent city there; it looked like people were protesting capitalism and the general state of politics. Then I ran into a Free Cuba protest. Spain is basically like Egypt -- people protesting a lot, Arab immigrants everywhere, and lots of weddings.

Justin and Alex joined me the next day, and we took Madrid by storm. Checked out the Reina Sofia Museum, home of Picasso's Guernica, ate some delicious Indian food, and wandered the streets for hours. Listened to some AWESOME blues/soul/funk music at a little place called La Boca del Lobo ("The Mouth of the Wolf"). The following day, we  hit up the famous Prado Museum after an epic three-hour long park chill in Madrid's largest park. More wandering.

Toledo
A short bus ride outside of Madrid and known for its pre-Inquisition mixing of Christians, Jews, and Muslims, Toledo and its beautiful alleyways are reminiscent of Jerusalem's Old City, and it was fun checking out a couple of really old synagogues. The churches were way grander architecurally, but walking through the synagogues and the streets or the old Jewish Quarter felt much more meaningful. Our day in Toledo was also exciting because we had expected to travel straight from Toledo to Cordoba, which makes sense on a map but not in the world of Spanish trains and buses. We wasted over an hour searching for a car rental company -- they were of course closed for siesta -- but eventually made it to Cordoba by bus by way of Madrid. No problema.

Córdoba
I've been waiting to see the Great Mosque of Córdoba's double-tiered arches ever since I studied them in the one art class I ever took, and they didn't disappoint. Afterward, we hit up another synagogue and a Sephardic Jewish museum, where we met a young man who was one of only 25 Jews living in Córdoba today. Meanwhile, we began to detect a pattern of houses of worship flipping religions, such a a mosque-turned-church or a mosque-turned-church-turned-synagogue-turned-church-turned-Buddhist temple-turned-McDonald's-turned-cathedral. For example.

Sevilla
Arrived in Sevilla last Saturday night. Promptly saw a flamenco show with an incredibly distressed-looking but very talented Spanish woman dancing to some great guitar. Sampled some tapas/beer. On Sunday, we visited the cathedral (a former mosque) and even climbed the minaret/bell tower.

Granada
The Alhambra! Justin accidentally bought tickets for the day before -- thus giving me good ammunition to use against him when I inevitably make some planning mistake during this trip -- so we hightailed it over there and almost pulled off the good ol' "our friend was sick yesterday so we missed our bus and thus you should give us free tickets today" story. But alas, we had to pay, and it was really worth it. Verdant gardens, beautiful Muslim and Christian ornamentation, expansive views of Granada. Centuries of Muslim and Christian rulers got it right.

That night, we sat in a medieval neighborhood on a hillside and watched the sun set over the city and the palace grounds. Then we met a Syrian man who gave us free falafel. The next day, we did a bike tour to a small town that was actually just a bike ride on which you stop for beer and sangria halfway through. Fourth reason why I like Spain.

Bilbao
We flew up to Basque Country in northern Spain and checked out the Guggenheim Museum in Bilbao, a beautiful building made of titanium that sparkles in the sun. We also visited a musuem on the Basque people, who are totally different from other Spaniards; in fact, their language, Basque, has no known links to any other Indo-European language. They also have a very strong nationalist movement going on; we saw one sign that said, "Tourist Remember: You are neither in Spain nor in France, you are in the Basque Country."

San Sebastián
We finally made it to beach/food/surfing/chilling paradise, otherwise known as San Sebastián. Home to one of the most beautiful city beaches -- and, of course, sunsets -- in the world, the old town also plays host to the most Michelin restaurant stars in the world (according to Justin's guidebook). Tapas, or small dishes, were plentiful; my favorite was steak covered with foie gras and olive oil.

We stayed two night at a hostel in the center of the nightlife, but the place had no common room or kitchen and seemed to still be under construction -- our rooms had no doorknobs until the second day, and there was constant hammering. We switched to another more homey place the third night, where we met tons of English speakers. We busked on the streets of San Sebastián with an Australian and a Londoner; Justin played guitar, and I sat on the ground and clapped. We earned enough for beers for all four of us.

Zaragoza
Which brings us to Zaragoza. After extending our stay in San Sebastián a bit, we ended up having to spend a night in this random place on our way to the Spanish Pyrenees for spectacular hiking and camping right along the French border. We're about to head to the bus station to go to Torsa, Spain.

Photos coming soon!
Posted by Ben Gittleson at 10:06 AM No comments: