The Cairo International Book Fair is a funny place. Between booths hawking ornate copies of the Qur'an and tomes detailing anti-Western conspiracy theories are even larger tents selling the provocative novels of Alaa al-Aswany and analytical works by Egyptian writers on the country's incomplete revolution. Across the Cairo International Fairgrounds are antique dealers, a tent with ties to Saudi Arabia, and major international publishers.

While plenty of Arab writers exist, the literacy rate across the Arab world is quite low and pleasure reading in Egypt is relatively unheard of. As the Economist put it: "The Middle East has a bad reputation when it comes to books; nowhere else do so few people read them."

So the Cairo book fair back when I visited in January was quite a sight. It was the first one after last year's uprising, and changes were evident: Muslim Brotherhood literature was on sale, as were scores of provocative works about Mubarak and the current political situation.

As were these cute kids' coloring books I snapped up. Entitled "The Arab Revolutions,""Elections,"and "Parliament," they're a primer on how things work in Egypt nowadays. Or at least how they're supposed to work. 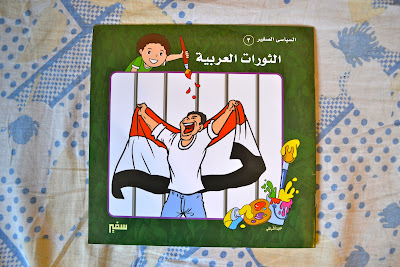 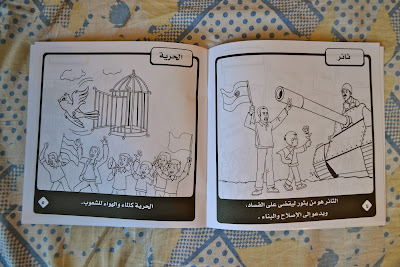 Right: The revolutionaries are those who rise up to eliminate corruption, calling for reform and construction.
Left: Freedom is like the water and air of the people. 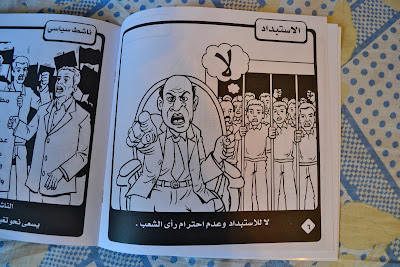 No to tyranny and a lack of respect for public opinion. 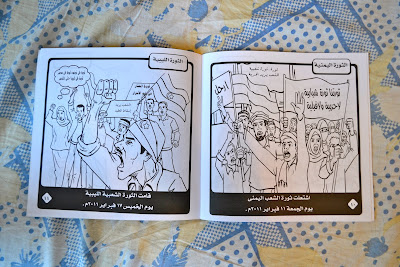 The book shows scenes from other Arab uprisings, like the "Yemeni people's revolution"(right) and the "popular Libyan revolution"(left). 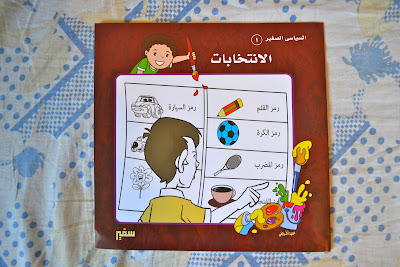 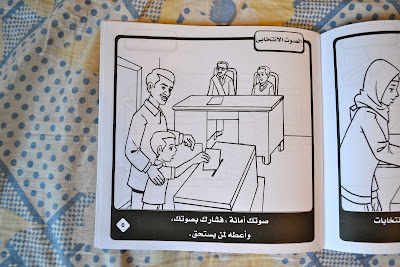 Your vote is secure, so share your vote, and give it to the person who deserves it. 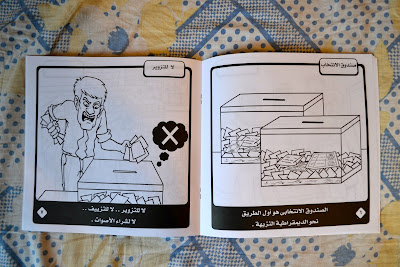 Right: The ballot box is the first way toward fair democracy.
Left: No to corruption... No to forgery... No to buying votes. 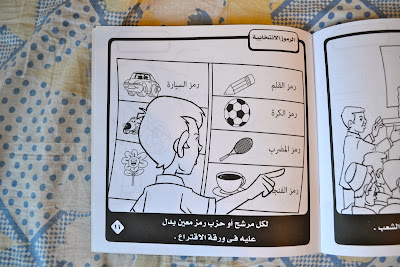 Electoral symbols: Every candidate and party has a certain symbol that represents it on the ballot. 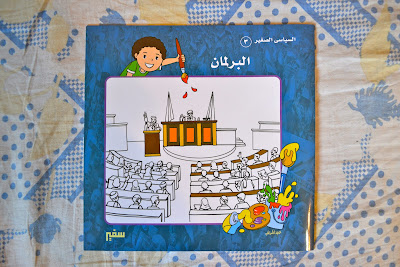 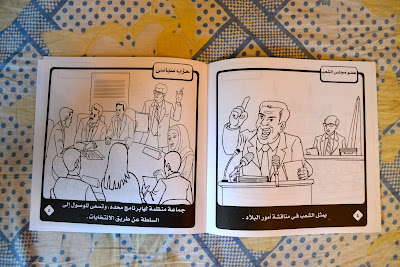 Right: Members of the People's Assembly represent the people in discussions about the country's affairs. 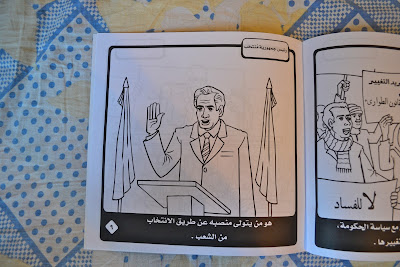 An elected president of the republic is one who takes his office via elections by the people. 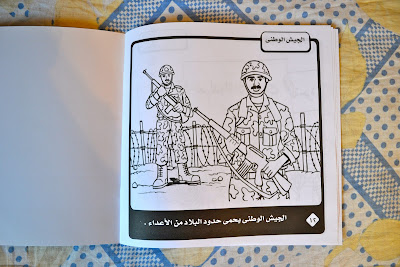 And, oddly stuck on at the end:
The national army protects the country's borders from enemies.
Posted by Ben Gittleson at 12:33 PM No comments:

I'm very sorry it's been a month since I last posted, as I know everyone's been dying for an update. Or at least that's what my mom tells me.

I started interning a few weeks ago at the Cairo bureau of Al Jazeera English, the international news channel headquartered in Qatar. Most people associate the station with Al Jazeera, the Arabic-language station that inspired its English counterpart. But AJE, which launched in 2006, is editorially separate from the Arabic channel and has become widely popular across the world—although it has so far failed to penetrate the American market in any significant way. Think of it as a kind of alternative to the BBC or CNN International; in fact, it beat out the former this year to win a prestigious British broadcasting award. Some have accused it of an anti-American bias, although it also receives plenty of criticism for harboring a pro-American slant. Watch for yourself for free online or on Comcast in the D.C. area.

The channel received accolades last year for its comprehensive coverage of the Arab Spring, and the Cairo bureau in particular was praised for its reporting on the uprising that toppled Mubarak. I'm honored to have the chance to learn from such talented journalists, and already they've taught me a lot about a medium I'm not as familiar with: TV.

On my first day, I was lucky enough to help out on a shoot about the revolutionary graffiti that lines the walls of a famous street near Tahrir Square, Mohamed Mahmoud Street. The road has played host to a series of clashes over the past few months, but in recent weeks it has gained fame mainly for its spectacular street art. It was also the address of CASA before we left the downtown area.

Check out the finished report here. Either of the artists' English voiceovers sound familiar?


(If you can't see the video, click here.)
Posted by Ben Gittleson at 5:20 PM No comments: