Officers Ahmed and the case of the missing wallet

Osman the taxi driver restored my faith in humanity this weekend. (Not that it was necessarily in need of restoring or anything, but still.)

I hailed his cab on a bridge Friday after playing squash, and all seemed well until I got out five minutes later at the square near my house and immediately realized my wallet wasn't in my pocket. I turned around but he had pulled away; I briefly considered taking up another taxi driver's offer to chase him down, but I had no idea where he went -- or what his name or license-plate number were.

But then, from Ashraf the traffic cop who said he'd call if someone brought my wallet back, to a man on the street who offered to give me change, Egyptian after Egyptian I met that afternoon went out of their way to help me.

I filed the report at the nearby police station, a dirty, converted old villa. I saw zero computers the entire time, and my police report consisted of Officer Ahmed handwriting a statement on a blank piece of paper. Some guys arrested for stealing sat in a metal cage across the room from me.

At one point, we had to wait a few minutes for Officer Ahmed #2 to return with a key to a safe behind the desk. I peered over to see what valuable treasure was housed inside, and lo and behold, the policeman carefully raised a rubber stamp -- and ink! -- for all to see.

I think this stamp was actually the most valuable thing in the station, since its mark turned some handwritten scribbles into a full-fledged police report.

In the end, the decency of a good Samaritan prevailed. I woke up Saturday morning to a call from a man named Osman asking when he could bring my wallet to me. An hour later, the cab driver from the day before showed up at my building, wallet in hand -- complete with credit cards, money, and my business card, which is how Osman reached me. It had fallen between the seat and the door. Stupid gym shorts.

I've heard from friends that wallets and phones often make it back to those who lose them in the taxis of Egypt, I think more so than they might at home in the U.S. 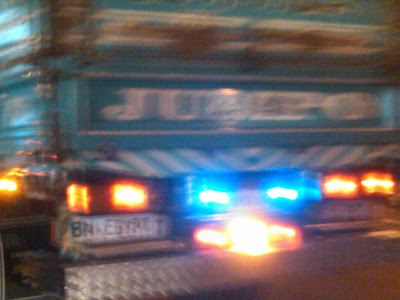 Posted by Ben Gittleson at 9:14 AM No comments: