The Lay of the Land

One of the coolest things about driving around Amman so far has been catching a glimpse of the occasional license plate from some nearby Middle Eastern state, on a nice BMW or Jaguar driven by a young guy with a headdress. I’ve seen Saudi Arabia, Bahrain, Qatar and the United Arab Emirates – talk about a stark reminder of where in the world I am and who chills around Amman’s rolling hills. I even saw an Iraqi plate yesterday! According to a few sources I’ve read, Jordan serves as kind of a stopover for rich Saudi and Gulf families on their way to vacation in Lebanon and Syria, particularly during the summer. It’s also a regional economic hub. Or maybe everyone has just come to Amman to study Arabic at the University of Jordan. Who knows.

Anyway, after a week and a half here I’m getting a better feel for the city, the language and the people. Amman is a pretty big city with relatively boring buildings – I think the previous king decreed that buildings had to be from the same white stone, and I don’t think the ground is good enough for tall buildings (Justin, maybe you can do some soil analysis? … I’ll send you some samples). Some sign I saw the other day by Rainbow St. – a really popular, cool, leafy road with cafes and cool buildings in a neighborhood called Jebel Amman – referred to the architecture as “unpretentious;" talk about dressing it up. 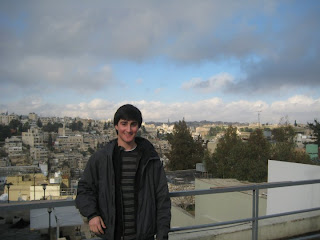 Looking out from Rainbow St.
Two aspects of Amman make it particularly unique, though: hills and circles. The city was originally founded on seven hills and now it sprawls over 20 or more. It’s thus hard to ascertain from maps the lay of the land, although I’ve explored a couple neighborhoods and am starting to figure out what’s what and what section of the city is visible when I look out from a vista. The downtown area, called Wasat al-Balad (literally: “the center of the nation”), is cheaper, older and has a really cool, Middle Eastern souk-y feel. Carpets, cheap falafel, crisscrossing streets and alleys, etc. I’ve also wandered around Jebel Amman (jebel means “hill” or “mountain”) and Rainbow Street, its main thoroughfare, as well as Jebel al-Lweibdeh (see a pattern?), a quiet, artsy, Christian area where a friend and I stumbled upon an arts center – kind of like an artists’ collective. More on that in a later post. But yeah, Amman’s not too walkable, although basically wherever you area in the older parts of the city you have a sick view. And there’s the occasional staircase in those areas; you can jump from one neighborhood to the next just by going down a flight of stairs. 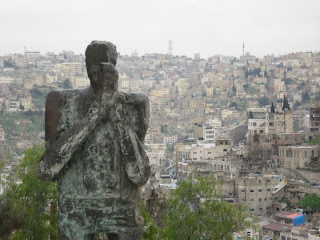 The view from Darat al-Funun, a cool art center in Jebel al-Lweibdeh

Circles, otherwise known as roundabouts or rotaries, are the major landmarks in the city. There are seven or eight major ones – and some smaller ones – that make up the interchanges along some of the main roads and often serve as the focal point for the neighborhoods around them. The seven or eight big ones have official names, but nobody uses them; you just call them “the 1st Circle,” “the 2nd Circle,” etc. I live by the 7th Circle – that’s what I tell taxi drivers when I get in (in Arabic: duwaar as-saabi‘a). The traffic and screwed up rights-of-way in these traffic circles makes the rotaries in the Boston area look like quiet intersections. My Association for Safe International Road Travel internal alarm goes off in my head every time we approach one (although some do have tunnels or bridges over or under them for through traffic).

This post has gotten pretty long, so I’m going to hold off talking about Jordanians, living in a conservative Muslim country and -- most importantly -- taxis, until later. I posted some pictures of my room on the past post. Please let me know if there’s anything in particular you’re curious about! Thanks! 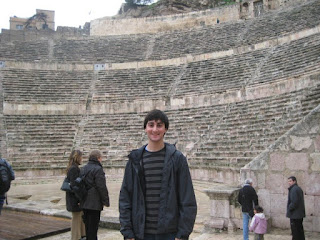 The Roman Theatre -- ruins in downtown Amman -- during orientation

Posted by Ben Gittleson at 6:51 AM