Refugees and protests in Jordan 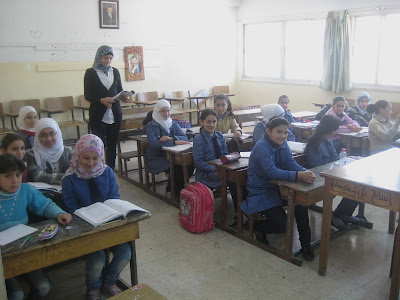 Syrian girls study in a school in Irbid, Jordan.

Egypt's had an eventful few weeks, and so have I. Bored by the lack of newsworthy action here about a month ago and spurred by news of protests and Syrian refugees in Jordan, I booked a ticket there to file some stories from the Hashemite Kingdom. I also traveled to Lebanon for a weeklong vacation I had wanted to take for a while.

Of course, after a few days in Jordan, Egypt exploded politically when President Mohamed Morsi widely expanded his powers with a constitutional decree. Clashes, protests, a constitutional referendum, and more broke the relative silence that had settled over Egypt in previous weeks.

Back in Jordan, the government faced some of the most intense popular protests in the kingdom's history, with citizens pouring into the streets to rally against a surprise announcement of cuts to some fuel and gas subsidies. I wrote about the protests for The National and The Egypt Independent.

My main impetus for traveling to Jordan, though, was to cover the massive influx of Syrian refugees who have crossed into Jordan in recent months. About 146,000 Syrians have registered as refugees or are awaiting appointments with the UN's refugee agency in Jordan, and the government says over 100,000 more undocumented Syrian refugees are spread throughout the country. Many live in squalor.

I wrote a story for Al-Monitor about how Jordan is feeling the crush of these refugees on its infrastructure and the public school system in particular, and I filed a piece for The National about how aid groups are rushing to prepare refugees for the winter cold. Since I returned to Egypt, I wrote a follow-up story for Syria Deeply, a great, new website, with more about how Syrian children are adjusting to schools in Jordan.
Posted by Ben Gittleson at 5:05 PM