Palestinians in Jordan: Refugee camps and one spectacular view

Two-and-a-half weeks ago I had the unbelievable opportunity to visit three Palestinian refugee camps in and around Amman in the company of top officials at the United Nations Relief and Works Agency for Palestine Refugees in the Near East (UNRWA), which oversees education, health care, social services and other aid to millions of Palestinian refugees in the West Bank, the Gaza Strip, Jordan, Lebanon and Syria (thanks, Uncle Frank!). UNRWA mainly dispenses services to Palestinian refugees from 1948 and 1967 who live in the aforementioned areas, a third of whom reside in 58 refugee camps.

Jordan treats its refugees very well relative to other host governments: those who fled to the West or East Banks of the Jordan River in 1948 and/or to the East Bank in 1967 enjoy full citizenship and rights here; as a result, about 50 to 70 percent of Jordan’s population consists of ethnic Palestinians. While Jordan is home to about 40 percent of Palestinian refugees (1.9 million), only 17 percent of Palestinians here live in the country’s 13 camps.

In a very official-looking, white UN van flanked by two white UN SUVs, our group of about six headed out to south Amman camp that I think was founded in 1967 (I forgot its name, but upon Googling, it appears that it might have been Wihdat, described below). There, we saw a dark, crumbling secondary school in which hundreds of girls studied in tiny classrooms so packed that the teachers often couldn’t walk through the aisles. A rented accommodation, the school was typical of many UNRWA facilities in which landlords are unwilling to address the poor state of the building they rent. While we were in the school’s small computer lab, a (really gutsy) girl jumped up in front of us and launched into a speech about how much she appreciated the school and how she was worried because she had heard UNRWA was cutting programs (not true).

Next, we vanned it over to nearby Wihdat (or maybe just somewhere in the same camp), a massive ’48 camp that is home to a one-year-old girls elementary school that sat in shocking contrast to the old facility we had just visited. The German government-funded school, owned by UNRWA, featured a science club, handrails alongside the stairs, a troop of singing girls serving coffee and snacks and – most noticeably – a ton of light. The site visit was meant to show us the difference between UNRWA-owned and rented facilities.

We got a different taste of the problems UNRWA faces in Jordan after a 30-minute drive south of Amman, at Al-Talibiyah Camp near Amman’s international airport. Wide, open farmland all of the sudden ends at the densely populated area surrounding the camp; the camp itself, founded in 1967, houses about 8,000 refugees in even tighter accommodations. We learned from a long presentation on the camp’s surprisingly advanced and professional urban development program that the camp’s isolated location is perhaps the greatest challenge to increasing its stagnant level of business.

Most Talibiyah refugees camp from Beersheba, now in southern Israel, and Hebron, in the southern West Bank. Interestingly, many camps consist largely of refugees from a certain city or area; it’s like large chunks of cities picked up and transported themselves to various locales around Jordan, and have now been calling Jordanian cities and camps home for decades.

Touring two homes among the hundreds of living accommodations arranged on a military-barracks style grid with narrow alleys gave me my first glimpse into life in camp “shelters,” UNRWA’s apt label for the pathetic, falling-apart buildings that serve as housing for so many refugees. The homes featured corrugated, collapsing roofing; dripping water by exposed wiring; very little natural sunlight; lack of ventilation; and very little privacy.

A UNRWA official asked me if the day’s trip had brought me to “my first camps.” It had, but talking with him and the other officials opened my eyes to how well off the people in these camps were relative to those in places like Lebanon or Gaza. Jordan’s camps looked like other low-income sections of the country – the two in Amman just blended in with the rest of the neighborhoods – save for the fact that they were much more densely packed. But in Lebanon, the officials said, some camps are so cramped and built-up that you can walk through them without seeing any natural sunlight. They told me that Palestinians there are institutionally discriminated against, too, with around 72 professions blocked to them because they are prohibited from joining the professional unions.

The whole day was way more educational and interesting than classes (which I got out of), and I feel very lucky to have gone with such experienced and knowledgeable people. Sorry no photos accompany this post – it wouldn’t have been appropriate to take pictures.

Luckily, I did take tons of photos where I went the next day: Umm Qais, a beautiful, ruin-filled area located in the hills in the northwest corner of Jordan, right on the border with Israel and the Golan Heights. Palestinians come from all over Jordan to check out the view into their former homeland; Tiberias and the Sea of Galilee are extremely close and clearly visible. The place also has really cool bathrooms. 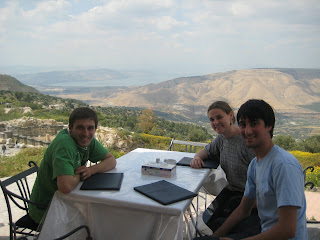 Restaurant with the best view in Jordan. 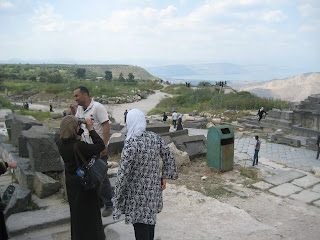 Checking out the Sea of Galilee with binoculars. 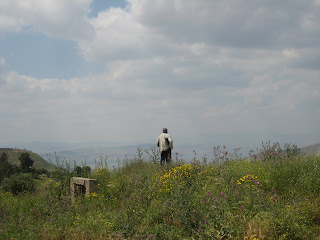 Posted by Ben Gittleson at 6:01 AM