Wadi Rum: Sipping tea with the Bedouin -- on steroids 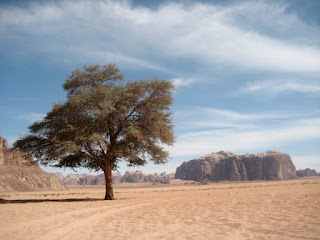 This wouldn’t be a true college study-abroad blog if I didn’t at one point say something like, “Sorry I’ve been delinquent in updating! I’ve had oh-so-much work! Man, is time flying by so fast!” You get the point.

Moving on. Two weekends ago, Adam and I traveled south to spend a night sleeping among the Bedouin of the spectacular desert area of Wadi Rum. We spent a few hours in a jeep, touring sites around the desert and often hopping out for short hikes, then camped out in tents, ate traditional Bedouin food and listened to traditional Bedouin music. Ok, maybe the music was piped in over speakers connected to a car radio. Regardless, the entire experience was one of my favorites of the semester. Highlights:

Dozens dead before noon: Public transportation within Amman is unfortunately pretty lacking, to say the least, and the same goes for public transportation between Amman and most tourist sites within Jordan. As the majority of tourists seem to come over for only a day or so on packaged tours of the region with big groups – often on a longer tour of holy sites around the region – there aren’t really many (if any) public busses serving certain sites. There’s literally only one bus from Amman to Petra each day, for example, and it leaves at 6:30 a.m.! To get to Wadi Rum, Adam and I had to taxi to Amman’s southern bus station, wait on a bus for over two hours for it to fill up (oh, by the way, time tables and schedules in general are nonexistent), get dropped off on the side of the road at the junction leading to Wadi Rum and then flag down and pay two young Bedouin guys in an old Mercedes to drive us to the entrance to the park. The bus ride was interesting: people just kept handing me food (of course I already had a full lunch packed thanks to my host grandparents), and we watched two extremely violent movies. Soooo many people died between the two films, and the volume was turned up soooo loud. The weirdest part was how everyone’s eyes were GLUED to the screen the entire time. It was 7 a.m., for crying out loud! I don’t even think the second movie was in Arabic – just in some tribal tongue the actors spoke when they weren’t killing people through martial arts.

The authentic Bedouin experience: Upon arrival in our Bedouin tour group’s office (read: tent), we sipped tea with the Bedouin and were merry. Check. Up next: four-hour Jeep tour of the desert with a Bedouin guide! Sweet! So we set off, but within 30 seconds our guide informed us that he was actually not Bedouin and, in fact, one of only two non-Bedouin guides at Wadi Rum (he was Palestinian). It felt like we were back in Amman. Oh yeah, he said he actually normally lives in Amman. 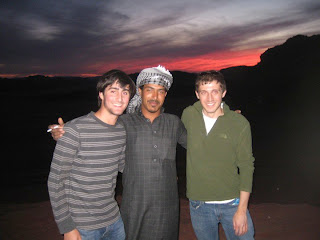 Us and Rakan, a rare non-Bedouin in Wadi Rum. 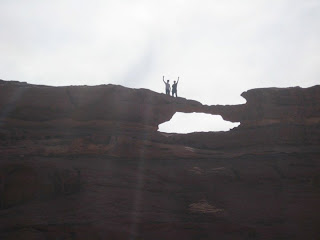 Adam and I atop the Little Bridge in the desert. 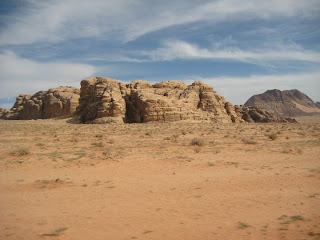 View from the Jeep.

Oh heyyyy: Beside the usual schpiel about sipping tea with the Bedouin, my guidebook would not shut up about how crowded Wadi Rum is with people galore and all the tour groups that breeze through the area. But, ostensibly because many visitors called off their trips to Jordan due to the volcanic ash cloud over Europe, the desert during our visit appeared remarkably empty. After a few hours driving around with little contact with other visitors, Adam and I (and our non-Bedouin guide) arrived at a sand dune with one other jeep. Climbing the dune, we saw some kids our age walking toward us. Then, all of the sudden Adam said, “Woah, I think I know that guy from Chicago!” Turns out the group consisted of eight American students spending the semester studying in Jerusalem. Adam knew two of them from home, another one is living this semester in the apartment directly above my friend’s place in Jerusalem and yet another one of them knows my freshman-year roommate at Tufts! Small world. They spent the night, coincidentally, at the same campsite as us. So cool. 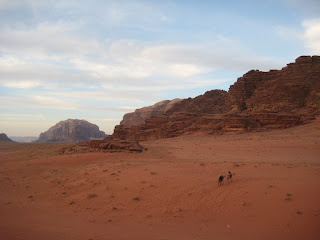 View from our campsite.

We spent the evening chilling at the campsite. The stars were beautiful, but it was unfortunately pretty cloudy. The sunset and sunrise, though, were among the most magnificent I’ve ever seen. 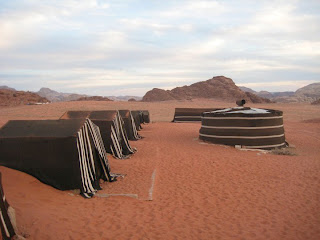 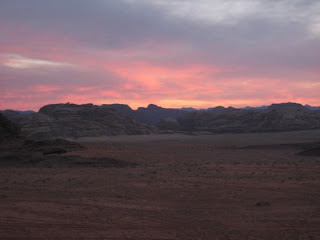 Quick update on my semester: My classes end tomorrow (Thursday), and I leave Jordan a week from Friday. So soon! So much to do, so little time. I truly apologize for not updating this blog more frequently, but I guess that’s life. Still, I’m hoping to get a few more posts out soon about: (1) the university and Jordanian students; (2) common Jordanian words/phrases; (3) tribal violence; and (4) a short reflection on my semester. Too ambitious? We’ll see. Please let me know if you’re interested in any other topic.

P.S. For those of you reading from the Boston area, I’m glad that over the last few days you were able to get a taste (literally) of what living in Jordan is like, that is, without a potable water supply. Take that, developed world! Although your water was still probably safer to drink than ours…

Posted by Ben Gittleson at 8:14 AM