Big backpacks, curfews, tons of class time, boys and girls giggling in their own gender-specific groups, notebooks with pictures flowers and babies and animals, driving to school in the morning and returning to your parents in the evening, bathrooms for teachers only, security guards who stop kids from having fun, rules about clothing and where you can sit and where you can walk.

Remember that time that you were in middle school? I do – because I’m reliving it right now! This whole semester has felt like I’m repeating those years, from living at home and commuting to school for the day, to having all my classes with the same people, to getting stared at constantly by students who have nothing better to do than sit with kids of their same gender and goof off between classes.

The University of Jordan, the host institution for my study-abroad program, is the premier institution of higher education in Jordan, with around 40,000 students (I think), graduate programs galore, a big library, a hospital and various research centers. Its leafy campus also contains maybe half of all of Jordan’s trees. Coincidentally, its long tree-lined avenues, assorted snack and coffee huts, gated entrances and a variety of other features make it look somewhat like an amusement park or former zoo. And for some unknown, bizarre reason, I would say that approximately 99 percent of the bathrooms are locked all of the time, or at least when I want to use them. Why? Who knows. My guess is it has something to do with not being able to pay to maintain them, or maybe because the administration thinks the students will dirty them up (in all seriousness, it’s probably the latter).

It’s been difficult to delve too much into the world of UJ students, but from what I’ve picked up after four months observing and interacting with them, it seems to me that there’s a serious lack of student activities and organizations. While there are sports facilities, I’ve never actually heard of a soccer game being played. Unlike at universities in the States, students here don’t have a plethora of clubs to choose from, and I don’t think there’s any real student union building or campus center. Kids just chill outside with their friends. A walk through campus will take you past dozens of small same-sex groups of students wandering about, wasting time until their next class starts. Seeing guys and girls walking together is pretty common, but the vast majority of the time there’s not too much social mixing. But it’s certainly not like male and female students – even the most religious – are afraid to talk to each other – they all do, in fact, interact all the tim. But it’s in the social/dating sphere, where there are definitely divisions for most students.

And the parking lots at UJ aren’t just for parking cars: If a male-female couple wants some privacy to talk, smoke or just hang out together, then they find a place on the curb in a parking lots and plop down between two cars out of view of passers-by. All of this awkward social interaction is a function of a society in which not much mixing occurs between the sexes prior to college; all of the government schools are gender specific. So social interactions for most students – but definitely not all (there are plenty of students who interact with the other sex just like Western students would) – can often mirror those that take place in the hallowed halls of American middle schools from coast to coast.

In terms of clothing, most guys wear relatively tight pants, and a collared shirt or at least a nice graphic tee. Most girls, meanwhile, wear a hijab (headscarf), but the degree of modesty varies from there. Girls tend to dress somewhat conservatively, but you’re just as likely to see short sleeves as you are a niqab (covering everything except the eyes). A girl wearing a hijab might wear a figure-hiding overcoat, while another hijab-wearing girl might wear a tight shirt and leggings. Overall, students dress pretty sharp and snazzy. See the variety for yourself:

(Sorry for the poor quality – I have a slow Internet connection here.)

The biggest mystery with regard to Jordanian students is where the hell they put all their books. Almost every guy only carries around, at most, one or two notebooks or books; any more, and he’s most likely a foreign student (and probably an American from my program). Girls almost always carry around a big purse with a couple notebooks or whatever in it. In short, backpacks are almost as rare as sexual freedom at UJ. It’s kind of frustrating being one of the only students with a big backpack; despite my dressing like a Jordanian, I’m bound to stand out as a foreigner.

Another major part of my perception of Jordanian students is their absurdly hilarious t-shirts with English phrases and words. The vast majority of young Jordanians love American culture and speaking English, and there’s nothing more hip and cool than having a sweet t-shirt with an American colloquialism. Unfortunately, many young Jordanians’ command of English doesn’t go much further than a level comparable to that found on the often awkward and incorrect Google Translate, and some haven’t yet discovered spell-check. This means that that cool American saying on your nifty t-shirt might actually be a horrible butchering of something some t-shirt manufacturer once heard on MTV but later forgot half of and made up the rest. Other t-shirts feature phrases that are grammatically correct but bizarre on a college student. Some examples:


Every morning, my 15-minute walk across campus would take me past two or three of these shirts, guaranteed. I wish I had been keeping a list of the funniest ones – these are but mere examples, although they give a good overview of the different types of ridiculousness UJ students wear on their chests every day.

I’ll leave you with the below t-shirt, which I’ve actually seen twice (!!) around Amman: 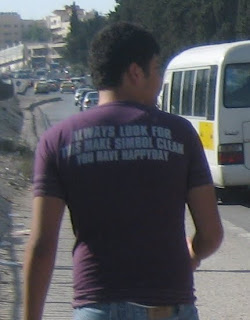 P.S. Upon re-reading this blog post, I realize that the vast majority of my comments are based on aesthetic observations of UJ students, often made from afar. I wish I had delved deeper into the issues Jordanian students care about and what makes them tick, or even learned more about the quality of their education as they see it.

Posted by Ben Gittleson at 9:28 PM