Yesterday I went with eight other members of my program to Madaba, a city about half an hour from my house that has a very Christian city center, including many, many old mosaics and churches, one of which houses an amazing mosaic map of the Holy Land. We took a cheap bus early this morning and proceeded to check out the very cool mosaic, which is actually pretty cartographically accurate, as well as some other archeological sites. I also went into my first mosque, one that appeared relatively new but nonetheless was beautiful inside. The mosque was honestly more interesting than the mosaics, and it – curiously – utilized rather churchy stained glass. (Funny side note: We saw this electronic board inside the mosque that looked like it had currency exchange rates, but we eventually figured out it was the times of the calls to prayer. Oops.) 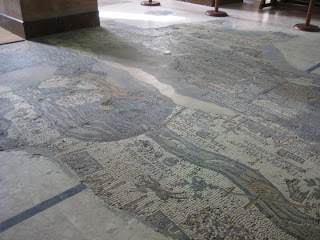 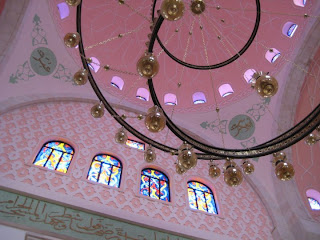 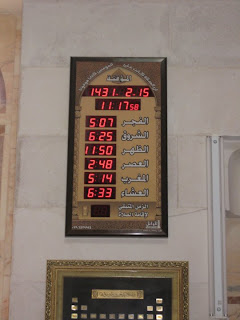 Times of the calls to prayer

Enough art talk. After lunch, the group met our three guides for a 35 km bike tour (planned by two of my friends – not an official program trip) to the areas around Madaba, including Mount Nebo, where Moses looked out over the Promised Land. Unfortunately, the weather wasn’t very clear and the view from Mount Nebo was rather bleak. Usually you can see the Dead Sea and into the West Bank, but the visibility remained low throughout the day. I hope Moses had a better view (and that there were fewer European tourists milling about in his day). 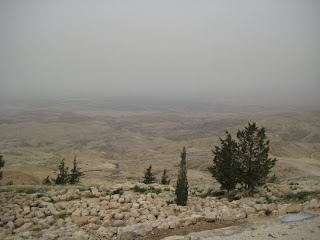 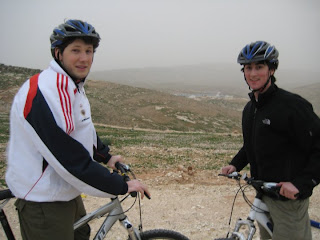 Then we biked many a kilometer to this field of dolmens, which are 5,000-year-old stone burial chambers or memorials – no one knows what they really are, who made them, what they’re used for, etc. In Arabic, a dolmen is called “beit al-ghula,” or “house of the monster.” Bedouins are supposedly afraid of them. Anyway, the bike ride to Mount Nebo and on to the the dolmen field was pretty hilly and intense, and a couple of my friends flew off their bikes or barfed on the side of the road, to later find themselves riding along in the support car. Good times in Jordan. In addition, bikes are practically nonexistent in the Hashemite Kingdom, so the Bedouin tending their sheep looked at us like we were Martians, and the kids on the side of the road kind of just stared, eventually trying to practice their English with us – excluding the one kid who tried to hit my back wheel with a rock. Real cool. Anyway, when it was time to return from the dolmen field, it was getting dark and drizzling a bit. Within 10 minutes, night fell and we rode through creepy fields and above really dark valleys with lights infrequently dotting the landscape miles away. The lead guide told me it was his first time biking after dark with a tour group. Wonderful. But no worries – we traversed extremely steep hills, random vicious-looking dogs and nutjob Jordanian drivers to make it back to Madaba all in one piece – where a guy in a truck proceeded to try to run us over (again, don’t worry: the guide reported him to the tourist police, who locals apparently are pretty afraid of). My friends from Tufts, Devin and Becca, found the tour company – which was super legit – planned the whole trip and did a really great job. The lead guide was even a champion Jordanian biker who gave me some tips (and gave Devin his Team Jordan windbreaker, for some reason). 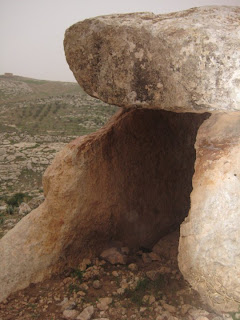 House of the Monster

If an intense 35 km bike ride over pretty tough terrain wasn’t enough, our bus ride home was another adventure. We had arranged through a hotel for a minibus to take the nine of us back to Amman, and all was going well until, about 10 minutes from Amman, all of the sudden ONE OF THE REAR TIRES POPPED OFF! We skidded a bit on the axle, sparks went flying and fortunately the driver pulled over quickly before anyone got hurt. We waited maybe 45 minutes for another bus to take us back to safety, all the while watching Jordanian drivers fly by the bus that was blocking half a lane without pressing on their brakes (or even really changing lanes) in the least bit. It was terrifying watching how close they got to the bus. Rubbernecking clearly is not a problem in this country. I returned home, and my host family assured me that it is not common for Jordanian buses to spontaneously fall apart on the highway. 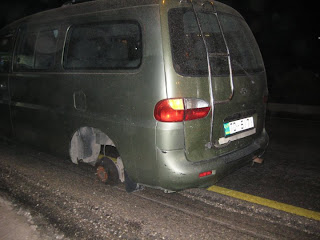 The day was pretty crazy, but it was an awesome bonding experience and just really fun in general. Everyone in my group seemed happy. We’re probably going to plan another (non-biking) trip for this coming weekend. As for all the haphazard things that went down today, the consensus was that it was all punishment for something I did at lunch: after a moral quandary, I had taken a bite of a very much non-kosher schawarma pizza (only in the Middle East!). Basically, I’m not keeping kosher this semester because (1) I don’t want to offend anyone’s hospitality, which always involves food and often some form of chicken; (2) there aren’t many kosher delis in Amman; and (3) I believe visitors to a country can’t really get to know its culture – especially here – without sampling the local cuisine. Long story short, though: God punished the group for my transgression, with a treacherous bike ride and a weird bus crash. My bad.

For more pictures, check my Facebook photo album. I also added a couple food-related photos on that old post about food.