Today is the most comfortable and at-home I’ve felt since I’ve temporarily moved to Amman. Why? Because we had a snow day on account of just a little slush and drizzle! Basically the same as Montgomery County Public Schools, always ready to cancel classes when they feel a quarter-inch of snow might fall the next day. Today reminds me of one winter day in maybe 10th grade when MCPS cancelled school the day before and all that happened was like an hour or two of rain. And today is Thursday, which means we have a long weekend (weekend here = Friday and Saturday). 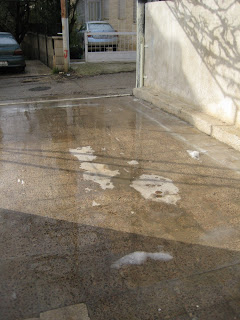 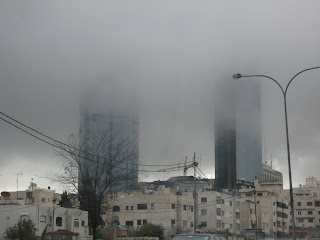 The two tallest buildings in Jordan, experiencing the beautiful weather.

A day off is also nice considering the past few weeks have been so mentally exhausting. My program is one of two run by the same company here; mine has 14 students and all of the classes are in Arabic, and the other has maybe 90 kids with some of the classes in English. My group takes a language pledge, which on paper means we speak Arabic all of the time except for maybe a couple hours a week. If the powers that be (i.e. the professors and program staff) hear us speaking English, we get a warning and lower grades. In practice, though, we speak way more English, at least for now. It’s extremely difficult getting to know people only speaking rudimentary Arabic, and my command of spoken Arabic – which is quite different from the formal Arabic I’ve been learning for five semesters – was next to nothing when I got here. Turns out the vocabulary from the story I read in Arabic 4 about 14th-century Moroccan explorer Ibn Battuta isn’t too useful in day-to-day life. So, at least at the beginning, we kind of speak Arabic in the morning and during classes, and at cafés and other places outside class, we turn to a mix of Arabic and English, or just plain English. Hopefully conversing in Arabic will come more easily in the future. I am actually already picking up a lot.

My general rule is that I talk to all Jordanians only in Arabic. Not to sound cliché, but when I step outside of the classroom, that’s when I feel like I’m really learning. Taxi drivers, store owners, asking people for directions – that’s where you really pick up the useful vocab and expressions, the latter of which always seem to involve Allah (i.e. “May God give you strength,” when you get out of a taxi). Colloquial Arabic and formal Modern Standard Arabic (hereby referred to as “‘amiyya” and “fosha,” respectively), are pretty different. ‘Amiyya is used in everyday life, while fosha is used on the news, in books, in advertisements, on signs, etc. – basically most things that are written. While much of the vocab is the same between the two, ‘amiyya is a lot more lax with respect to grammar and pronunciation. A lot of words are slurred together or are said more quickly, with less attention paid to vowel sounds, and most of the poetic grammatical structures I’ve been studying over the last couple semesters have become irrelevant. Most importantly, verbs are conjugated differently, and some key verbs are just completely different words in ‘amiyya. I haven’t learned all the tenses in ‘amiyya yet so it’s been hard. When I talk, it’s a combination of fosha and ‘amiyya, and in response sometimes people just chuckle and try to dust off their fosha from grade school. Most people can understand fosha; when they respond in ‘amiyya, though, I can’t always understand them. So they might just respond in English, because its easier for them to do that than speak in the archaic language that is fosha (which is hilarious to think about). I tell them “baas ‘arabi” – “only Arabic” – and then when I speak I sound like I’m speaking an old, Qur’anic tongue (because I am!). Whatever – people really like that an American is trying to learn Arabic. My host grandfather told me that learning Arabic was like swimming in a large sea of complicated words and expressions. 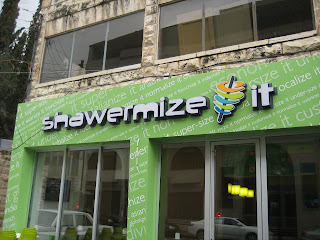 An example of the proliferation of the English language in Amman.

In addition to interacting with other Jordanians, I only speak Arabic to my host family. It’s really frustrating because my host grandfather speaks English fluently, as do most of their kids – one of whom attended college in the U.S. – and I really want to participate in their conversations but can’t to a great extent at this point. My host grandmother is a teacher, though, and two of their daughter-in-laws teach fosha to Jordanian elementary- and high-schoolers, so they’re all about speaking Arabic to me and helping with my homework. In fact, I’ve been surprised in general about how willing people are in terms of speaking Arabic to me and being patient with me. I think they just appreciate a foreigner’s willingness to come to Amman and study Arabic.

I shall leave you with this photo from the café I’m in now, called The Good Book Shop. Devin and I only just realized that it’s a Christian book shop, despite being surrounded for a couple hours by self-help books, Bibles and books about cocktails (i.e. alcohol – forbidden in Islam). This is a ridiculous book: 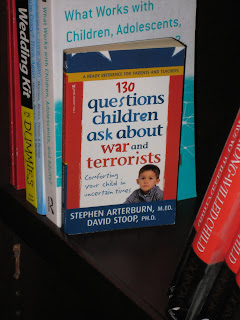 Welcome to the Middle East.

P.S. After talking to other members of my group, it apparently is actually snowing around the city. But not really that much. The weather here seems to be like Jerusalem, which is also located at a higher elevation and is only like an hour away.

Posted by Ben Gittleson at 5:44 AM