Yom 'aadi fi hayaati = A regular day in my life

I’m finally beginning to settle into a regular routine, which is nice considering the hardest part of moving to a new country and living with a new family has been creating constants in my daily schedule. While many things are similar to the States, even familiar activities like going to the gym are a little different (read: weights measured in kilograms instead of pounds, not to mention significantly more Jordanian meatheads here than at the Rockville JCC). What follows is the schedule I’ve followed so far, but I’m not completely comfortable with it, mainly because it’s missing something important: free, personal, alone time (preferably with Internet).

I wake up bright and early every morning and maybe three seconds later a rush of the frigid, stagnant air in my room welcomes me to the absolute worst part of my day, by far: getting dressed. To say that my bedroom is cold in the morning is an understatement. Take whatever temperature it is outside, add maybe 15 degrees, and that’s my room temperature (or at least that’s what it feels like). For reference, the outside temperature dipped below freezing the other night. I swear I kind of saw my breath yesterday morning. 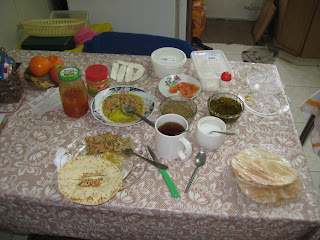 Next, after a breakfast of pita, cheeses, zaytar (a spice), olive oil, apricot jam, vegetables, tea and, if I’m lucky, ful, hummus or falafel (all arranged/cooked for me by my host grandfather), I hail a taxi from near my house and take the 15- to 20-minute ride to the University of Jordan. Every morning I sit through two hours of Modern Standard Arabic (fosha), which is pretty freaking difficult; the professor’s good and we’re being taught the language the way it’s supposed to be taught – through literature and poetry – but it’s tough having 10 hours of the class a week. 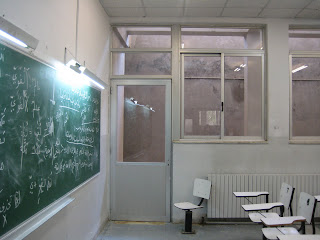 The wonderful view from our basement classroom. Fosha takes place in the basement of the behemoth engineering building, intentionally hidden away from all the English spoken at the language buildings on the other side of campus. It’s cold and dreary there.

Moving on. After that class I generally have some free time, in which I do some combination of the following: (1) homework; (2) use the Internet; (3) eat the lunch that my host grandfather packs for me daily – it generally consists of four pita-and-cheese/zaytar sandwiches, a cucumber and an apple and/or orange; or (4) go to a delicious restaurant near the school and get some kind of dirt-cheap falafel/hummus/meat/shawarma/chicken/tomato/pickle combination. I’m also going to start meeting with a Jordanian student “peer tutor,” ba’ad shway (=after a little while). Wow, I actually thought of that phrase in Arabic before I did in English. Sweet.

Ba’adein (=afterward – did it again!), I have a little less than two hours of either electives or colloquial Jordanian. My electives consist of Contemporary Arab Media (of course) and Creative Writing. All of my professors are very, very smart – or so they seem – and are actually pretty good at teaching. They tend to combine American and Arab styles of instruction to different degrees; there’s been a much greater emphasis on memorization of vocabulary, for example, but, like my Arabic teachers at Tufts, they repeatedly plea with students to ask questions and interrupt them whenever we don’t understand something. We also take this once-a-week, half-credit class called Interpersonal Communication, taught in English by an American study abroad-program staff member. 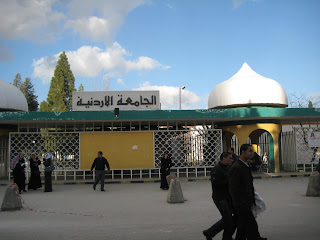 The main gate at the University of Jordan. They don't really ID foreigners -- it's like reverse racial profiling.

After classes, I go to either (1) the gym; (2) some nearby café to use the Internet and do homework with other people; or (3) TAGKS, a fancy computer lab near the university to which all the kids on my program have access. Upon returning home in the late afternoon/early evening, my host grandmother heats up dinner for me and I generally eat alone (they eat earlier, around 4:30 p.m. or so). Then I do homework; shower; have tea, cookies and sweets; and eat at least one orange and generally an apple, too – peeled and cut by my host grandfather. Note: Jordanians love to put different spices or flavorings or whatever in their tea; I’ve tried nana (mint) and muramiya (a kind of minty leaf), among other things. And when I do homework, my host grandparents love to help – although my host grandfather did tell me the other day that the last time he took a fosha class was in 1950.

Shockingly, I go to bed before 2 or 3 a.m., my normal bedtime at Tufts – sometimes as early as midnight! In addition to learning the Arabic language and interpersonal communication and such, coming to Jordan has taught me the value of sleep. When basically the entire day is mentally exhausting, all I want to do is sleep, sleep, sleep.

Sorry this post was boring. Up next: fun/crazy things that happened over the past week, and Petra! 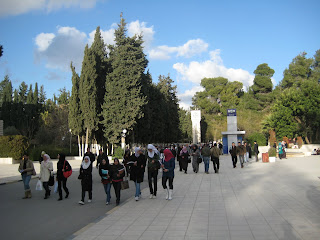 Main road leading in from the front gate at UJ.
Posted by Ben Gittleson at 11:37 AM