Petra: Bedouins, a snowball fight and a wonder of the world 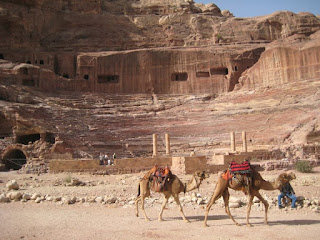 The Roman Ampitheatre at Petra

Many tourists breeze through Jordan in a day or two, and nearly every single one hits up the ancient city of Petra, one of the seven New Wonder of the World. A few weeks into my semester here, our program took us on an Arabic-only trip to Shobak, home of a crumbling Crusader castle; Little Petra; and PETRA, one of the coolest places I’ve ever been. Our trip, in bullet points:

- Shobak: Shobak castle was one of my first castles, but nonetheless wasn’t terribly impressive. We wandered around the grounds with not many other tourists around – save for a very well-dressed British family – and checked out a really dark and creepy passage hidden down a staircase; the Crusaders collected water in the hole, which descends hundreds of steps into the ground. Oh yeah, it had snowed the week before across much of Jordan, leaving strangely out-of-lace white patches across hillside on the desert. 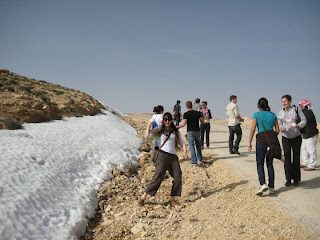 Flannery and her snowball during our epic desert snowball fight. Bet you can’t say you’ve done that before. 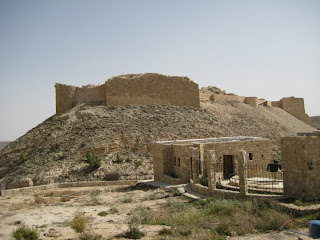 Shobak, or what's left of it 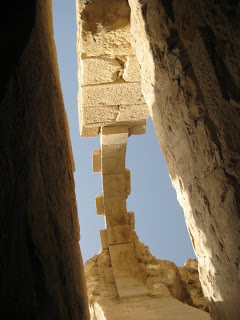 Looking up at some ruins at Shobak.

- Little Petra: Apparently our guides didn’t think we could handle the real thing on the first day, so our group ventured over to Little Petra, a smaller version of the fabled town with facades and caves carved into towering, jagged cliffs. A Bedouin man played some tunes for us on a traditional instrument (I forget the name). As we left, another Bedouin dude tried to cajole us into buying cool designs in bottles of sand: “Buy one for your wife … and one for your second wife.” Those words were exactly what my friend Virginia’s guidebook said we’d hear from the Bedouin at Little Petra, haha. 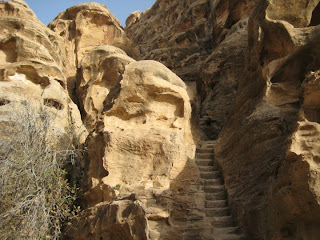 Warming up for the real thing at Lil' Petra, home of many carved-rock staircases.

- Petra Kitchen: After settling into our fancy-shmancy hotel (read: they had a pool) for the evening, the Arabic Language kids and the two professors accompanying us (yes, you read that correctly) headed over to Petra Kitchen, a very classy little restaurant where tourists help cook their own traditional Arab dinner as they learn about the dishes and eat with the Jordanian chefs. Five of us sat at a table with a nice British family and a couple from D.C.; we subsequently got admonished for speaking so much English when we were supposed to only speak Arabic (LAME.). Afterward, my friendly Jordanian professors invited four random guests onto the bus for a crazy ride back to the hotel, during which one of the randos serenaded us with a song by the Lebanese diva Fairouz, promising he had only had “shay” to drink that night. 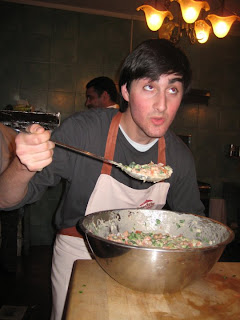 Tasting the tabbouleh salad for which I chopped vegetables.

- Petra: For those of you who haven’t been, it’s tough to describe in words how cool Petra is. Actually, correction: it’s tough to describe in Arabic words to non-Arabic speakers how cool Petra is. That’s exactly what our Arabic-speaking tour guide attempted to do. He was pretty good, actually, although I didn’t understand much; I did learn how to say “ancient burial site” and “water canals” in Arabic, though. Useful, right? 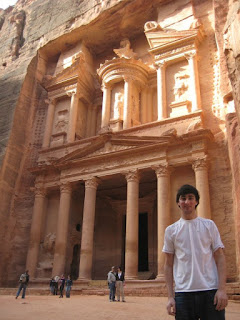 The Treasury in sweet morning sunlight.

Anyway, Petra was absolutely spectacular. The area for thousands of years B.C.E. had been populated by farming communities and traders, and eventually became a key stop on a trade route between the ancient Mesopotamian and Egyptian empires. It popped up a bit in the Bible, too, as Kings David and Solomon jockeyed for control of the area; Moses’ brother Aaron died near there, and a shrine to him sits atop a nearby mountain. Around the sixth century B.C.E., the Nabateans settled the valley at Petra and began to carve marvelous caves and facades into the tall, jagged, impenetrable cliffs that protect the area from outsiders. Over the next 1,500 years or so, the Nabateans operated a flourishing trading post heavily influenced by the Romans. By the 13th century C.E., Petra was practically deserted.

We woke up pretty early and arrived before the first tour groups, catching the Treasury, the main attraction, in beautiful early-morning light. We then wandered a few kilometers through the valley – which is narrow in some places but wider in most – and hiked for around 45 minutes to the Monastery, which was more amazing than the Treasury. After a delicious lunch at a restaurant within the grounds, we explored the different facades and climbed random pathways, discovering ancient, man-made caves and more modern Bedouin people sleeping on rocks. 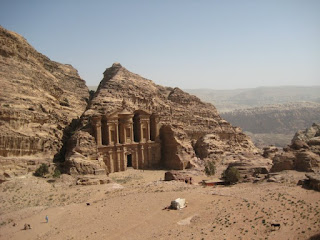 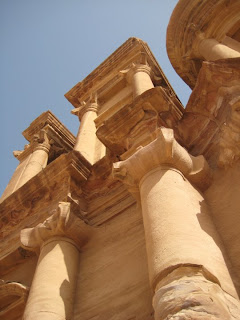 The Monastery from close up. 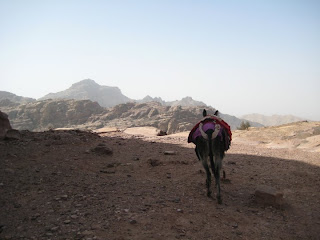 A donkey, seen from behind, checks out what one sign called the “Grand Canyon” -- it was near the Monastery. Come to think of it, the valley was actually pretty big and red, and there were a bunch of French tourists there. Maybe we were actually in Arizona?

- Bedouin kids + postcards: Speaking of Bedouin, the recent history of Petra is fascinating, too. As recently as maybe 30 years ago, there was practically no limits on entering Petra, and tourists regularly slept inside Petra’s ancient caves alongside their Bedouin hosts. In the 80s, the government moved the Bedouin tribe living in petra to a newly built village a few kilometers away, but today, their presence (and that of other nearby tribes) permeates the valleys and trails of Petra. And by permeating, I mean there are tons of little kids and older women hawking postcards, handmade jewelry and souvernirs throughout the archaeological grounds. True to our goal of befriending Jordan’s entire youth population, Adam and I met a nice little girl who was selling packs of postcards while playing among ancient ruins – that latter of which is clearly a popular pastime in this country. She couldn’t have been more than maybe eight years old, and told us about how much she loved Obama; she didn’t know who Bush was!

As always, there are way more photos on Facebook, as well as two additional ones below. Also, some from a daytrip this past weekend to the Dead Sea, Jordan-style. 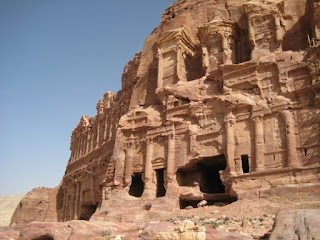 A big tomb at Petra. Basically everything that wasn't a monastery, a church or a treasury was a tomb. 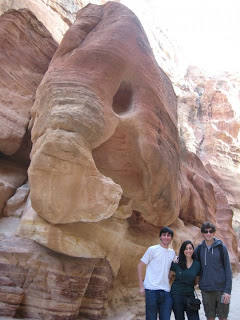