Maybe they should just install some benches in Iraq

Amman made it into the New York Times last week with a feature story about – you guessed it – sidewalks and benches! Oh man, welcome to the oh-so-tumultuous news cycle here in Jordan. The NYT’s Michael Slackman discusses the new public-improvement projects:

“These are not one-time projects, a few benches here and there, but part of a master plan for Amman, an attempt to bring order to a city with roots that date from 8,500 B.C. and whose modern incarnation hosts 2.5 million residents, 3 million in the summer. Amman’s master plan has a slogan – ‘A livable city is an organized city, with a soul’ – a subtle way of describing what Amman does not want to be, which is Dubai.”

One line in particular resonated with my experiences thus far. The reporter explains how Amman is a city made up largely of immigrants – Palestinians, Iraqis and Lebanese, oh my! – and that it is struggling to claim its own identity. “But no matter how many generations later [after their families immigrated to Amman], people rarely identify as being from Amman, many people here said.” So true – so much of the time when I get in a taxi or meet a new person, they’ll tell me they’re from Palestine or elsewhere; almost without exception, they were actually born in Jordan and their parents or grandparents were the immigrants.

In other news, the other night I was chilling in the family room on my computer when I noticed that, on the TV, ad after ad on the Dubai-based Al Arabiya regional news channel was touting the views and promises of various candidates in the upcoming Iraqi elections. Woah – I’m actually close enough to Iraq to see firsthand the election advertisements! Interestingly, many of them seemed to oppose the violence and explain how their candidate or party would fix things. ... And WOAH a second time! I just noticed an ad on my Facebook profile for an Iraqi candidate's Facebook page. Crazy... 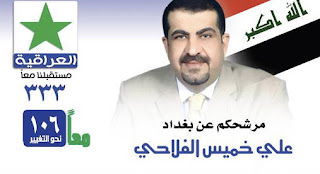 Some of the phrases on here include, "Your candidate for Baghdad," "Together ... toward change," and "Our future, together." How nice and hopeful.

Now, for Random Fact #237 about Jordan: This country has a severe lack of change! From taxi drivers and corner-shawarma shops to supermarkets and banks, no one ever has any small bills! It’s soooo annoying. I have to check to make sure I have a couple one-dinar notes on me before I get in a taxi, as chances are the driver won’t have the appropriate coins and bills to make change for a five-dinar note. It’s so bad that you hear, “Ma fi frata” (“There isn’t any change”), almost as much as the ubiquitous “inshallah” or “alhamdullilah” (“God-willing” and “praise be to God,” respectively). Some official seriously screwed up when he was trying to figure out how many of each note to print... On a more serious note, though, I realized that one reason some people, like taxi drivers, might not have the luxury of having change available to their customers is because they don't do enough business and might not actually have enough money available to do so.

Bonus Fact: They don’t have napkins here either! Instead, everyone uses tissues. In the U.S., the brand name is Kleenex; here, it’s “Fine,” pronounced like in English. So let’s say Farfoud drops some hummus on his shirt. Oh man, not again, ya Farfoud! In order to wipe it off, the now chickpea-covered man might say to his friend Rami, “Pass me a Fine.” And all would be well.

Posted by Ben Gittleson at 7:38 AM