The Music of Amman, Part I

I wrote this post about a month ago and only recently had fast enough Internet access for long enough to upload the accompanying video. Enjoy:

Two sounds heard every day across make this city quite different from D.C. or , and on my second day with my host family both of the noises woke me up within a few hours of each other.

First, sometime around 5 a.m. came the first of five daily calls to prayer. Every day, every mosque with a minaret (tower) uses super-loud speakers to blast the voice of a man reciting beautiful lines in Arabic. Every time I hear it I get chills. It’s almost surreal walking down the street or sitting in a café and all of the sudden hearing a booming reminder that you’re in a Muslim country. It’s pretty crazy that an entire society can be religious enough for it to be okay for the local place of worship to literally project its preferred way of life and observance onto the masses. I’m still learning, but I think when observant Muslims hear the call to prayer, they don’t have to pray immediately but can fulfill the religious obligation within a reasonable period of time afterward. Daily prayer seems to be a relatively private matter, except on Friday mornings, when a lot of people congregate at the mosques to pray. But in general, you can kind of just take a break from what you’re doing and head over to somewhere with a prayer mat, or lay your own; there’s one in the corner in the computer center we hang out in a lot, for example. The call to prayer isn’t too loud in my house, as we don’t live near many mosques. It is loud enough to hear clearly, though. 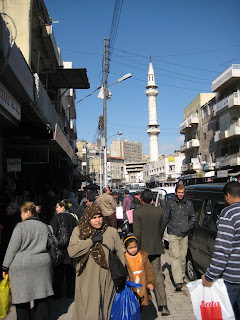 The al-Husseini Mosque's minaret, from which the call to prayer is projected, towers over the streets of Wast al-Balad (downtown Amman).

More peculiar than the call to prayer is the music of the gas trucks. Gas for cooking and heating isn’t piped directly to houses and businesses in ; instead, hundreds of small, blue trucks drive around slowly, blasting their music to alert people that they’re near. People in need of gas run outside shouting, “Ghaz, ghaz!” to get the drivers’ attention. The music is soooo creepy, and all of them – even different companies – use the same bizarre tune. Observe:

Your speakers aren’t broken – that’s what the trucks actually sound like. Sorry for the shakiness; my host grandfather seemed to think they wouldn’t be happy with me filming them. And if this doesn't work in the

e-mail version of this post, try playing the video on the blog itself.

The gas-truck drivers seem to freak out Friday mornings, when I hear them no fewer than five times in a few hours. “Why can’t people just call when they need a gas delivery?” you ask. Great question – haven’t figured that one out yet. I asked my host grandfather the same question, and he said he didn’t know, adding that he thought the music was annoying. I think the system is a remnant of a time when people here didn’t really use telephones to communicate. You still see that manifest itself elsewhere, such as when friends and family drop by without calling first. 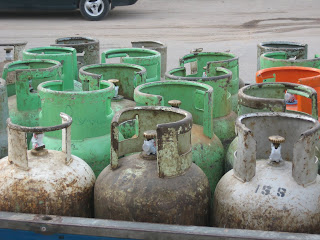 Gas tanks perched ominously on the back of a gas truck.

Anyway, the music sounds like it’s out of some Tim Burton fairytale and seems to follow me everywhere. Hope everything’s good back in . Yalla bye bye.

P.S. One month later, the music still creeps me out – it’s so ridiculous. Only now since I shot that video of the truck last month, whenever my host grandfather hears a gas truck approaching, he runs over to me and goes, “Ben, the ghaz is here! Do you want ghaz?!?!”

P.P.S. I headed up to see the beautiful Roman ruins in Jerash, a city not too far north of . Blog post/photos to follow soon.

Posted by Ben Gittleson at 5:49 PM