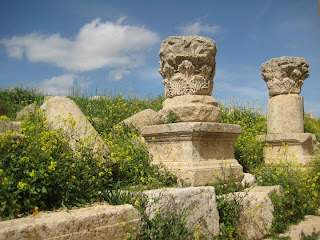 I traveled to Jerash last Saturday with Adam and Virginia, two friends from my program, and three of Adam’s new South American friends who are studying at the University of Jordan. Jerash is an ancient Roman city that has actually survived pretty well and wasn’t too heavily trafficked by tourists when we visited, so that was cool. But the highlight of the trip was – get ready for it – the people we traveled with and the friends we made along the way…

Just kidding. The highlight was the sick Roman ruins, the photos of which are beautiful. But the people were fun, too. Read on:

Arabic -- Español -- English: Adam had warned us that two of his friends, both from Colombia, spoke little to no English and basically no Arabic, so I figured it would be a good chance to dust off the ol' Spanish and converse with people in a language I had studied for six years in middle and high school. Guess what: it was way harder than I thought. After not speaking a language for so long, I couldn’t easily recall simple vocabulary or even remember certain sentence structures or grammar. When I started speaking Spanish to the Colombians, I would end up spurting out some Spanish/Arabic hybrid sentence, which was a problem because the South Americans spoke maybe only like three words of Arabic! They’re here starting to learn Arabic from scratch; that means that they don’t have any command of the two languages you can use to get by in Amman, Arabic and English, and that they’re basically lost a lot of the time. Back to Jerash: I would end up saying things like, “Hola, quieres b’truuh halaa’?” with the first two word in Spanish – “Hello, do you want (to)” – and the rest in Arabic – “go now?” Sooo confusing, but an awesome mental exercise trying to translate between two foreign languages without using any English. And when they – or Adam, who is fluent in Spanish, among other languages – reminded me of Spanish words and grammar, bits and pieces would immediately come back. Oh, by the way, the third kid was from Brazil, a PORTUGUESE-speaking country, although his command of English was way better, plus he could pull of a decent, functional Portuguese-infused version of Spanish. 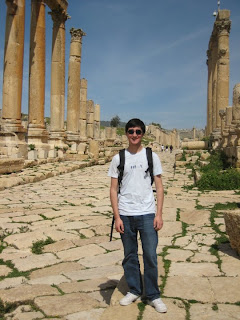 Sipping tea with the Bedouin: Virginia always jokes that her guidebook repeats over and over and over that you can “sip tea with the Bedouin” wherever you are in Jordan and, through shay (=tea), get an authentic taste of the country and its people. And of course, that’s exactly what we did at the Temple of Artemis, the most striking extant ruin in Jerash. After this really Jordanian/Bedouin-y, local, young guy who was selling coffee, tea and water urged us in like four languages to purchase something from him, I decided I would shell out a few qirsh (Jordanian cents) for a cup of the shay stuff because I was feeling a little sick and congested. Good decision – we ended up spending about 20 minutes or so just chilling with this guy and the really nice tourist policemen standing nearby. Among the topics of conversation: favorite Jordanian foods (mansaf, duh), most beautiful Arabic names (Muhammad, duh), funny Jordanian/Bedouin slang and the different languages everyone spoke. The tea-seller wouldn’t take our money for anything at the end, including a few cups of tea and a couple bottles of water. One of the cops even invited us over to his house after he got off, which was unfortunately too late for us. All of this transpired in Arabic, by the way, which was almost definitely the reason they loved us so much. 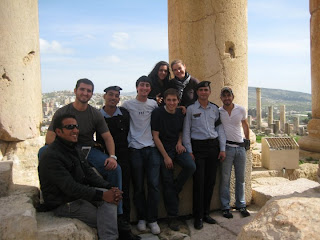 The moving columns: About 15 minutes into exploring Jerash among the smattering of German, Spanish, Jordanian, French, Canadian, etc. tour groups wandering around the ruins, a super-sketch kid and a smaller version of him came up to us, offered to take our picture and then insisted that we follow them to see “the moving column.” Thoroughly confused and unable to figure out a way to shake the kids, we followed them for a minute to a seemingly normal column along the colonnaded main street. Then the bigger kid pointed to a coin jammed between the column and its base and preceded to push really hard on the column, which actually started swaying a tiny bit! “Don’t worry, won’t fall.” Adam tipped him like 20 cents or something, which he was apparently dissatisfied with. Oh well. Later on, at the Temple of Artemis with the Bedouin guy whose name I clearly have forgotten, we were able to push on the columns ourselves and make them sway; this time, a spoon stuck between the base and the column facilitated the movement. What was going on? Turns out, according to my guidebook, they were designed to sway a bit to offset the effects of strong winds and earth tremors. Cool. 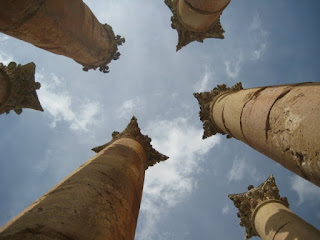 Built to withstand the forces of nature.

Amman to Jerash and back = cheapest trip ever:

Admission to the ancient city, for university students: 0.50 JD

Taxi ride back to Amman: 4 JD 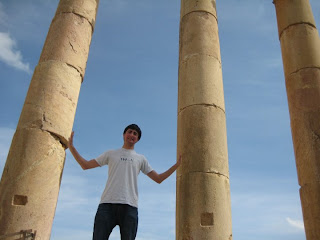 Hey hee (=that’s it). More photos can be found on Facebook, as always. Yalla bye.

Posted by Ben Gittleson at 9:33 AM