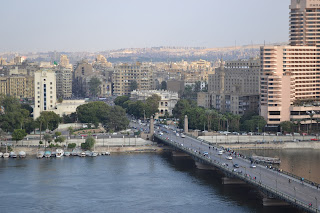 Tahrir Square off in the distance at around 2:30 p.m. today, as seen from across the Nile.

Fighting in Tahrir Square and the surrounding neighborhoods is continuing into its second night this evening, as violence between protesters and police has reportedly left over 1,000 injured and two or more dead. I'm sitting at home in my apartment in Dokki, a neighborhood on the other side of the Nile about a five-minute drive or 25 minute walk from Tahrir.

These clashes appear to have started when police moved into the square yesterday afternoon to clear out a couple hundred protesters who tried to start a sit-in there after a massive, peaceful demonstration on Friday. Yesterday and today, rocks were thrown, tear gas was lobbed, and the police reportedly fired rubber bullets and birdshot at demonstrators.

The violence has largely centered around the gate to the American University in Cairo's Tahrir campus, where my classes take place. It's been surreal to see clouds of tear gas waft up into the air above campus, bloodied protesters being carted down the sidewalk I walk on twice daily, and riot police form a wall by the Hardee's and McDonald's branches I pass every morning and afternoon. The president of AUC said in an email today that campus guards reported groups of armed infiltrators on campus—which was closed today indefinitely—and that students said they saw people on campus throwing tear-gas canisters toward protesters outside AUC's walls.

About an hour ago, as my friends and I stood on my roof overlooking the bridge toward Tahrir, we suddenly saw dozens of protesters on the bridge sprint in our direction and then scatter when they arrived at the square near our apartment building, which borders a police station. It was difficult to see if the police were out there fighting the demonstrators, but a couple Molotov cocktails lit up the air nearby, and the street lights on the bridge went out.

The situation here eventually calmed down, and the protesters headed back in the direction of Tahrir. The Russians playing volleyball in a walled-in schoolyard no more than 100 feet away seemed unfazed. The strange thing about Cairo protests in general is how localized they can be, and how life can go on as normal a few blocks down the road.

These clashes are different from the other couple flare-ups we saw over the summer and in the fall, in that they've lasted significantly longer and are occurring only eight days before parliamentary elections are scheduled to kick off. They also seem to be building into this evening, as more and more people head downtown. It's been quite confusing trying to figure out what the security force's or military rulers' intentions are in all of this, or even if they intended for the situation to get out of control to the extent that it has.

Here in Dokki, I'm flagrantly putting off homework and watching the news unfold online. For updates, follow me on Twitter @bgittleson.

Update (11:45 p.m.): After a few more hours of on-and-off clashes downtown, I'm heading to bed. Based on Twitter and online news coverage—as well as some firsthand reports from friends who made their way to Tahrir this evening—it's still pretty tense. Videos show policemen dragging dead bodies, and for a while we heard nonstop sirens from ambulances speeding in the direction of downtown. I'm still probably going to have classes tomorrow, though; it sounds like they'll be held in a different location off of the Tahrir campus. Good night, and rubina yustur (may G-d protect us)!
Posted by Ben Gittleson at 11:21 AM