One day later, the protests are not just continuing but have gotten larger. Throughout the day today, the casualties figures creeped higher and higher, and I've seen and heard reports of at least 44 killed and 1,500 wounded. Remarkably, the fighting itself remains concentrated in a few square blocks right by the American University in Cairo campus and the nearby Ministry of the Interior.

On a personal note, I received news via Facebook this evening that a nice young man I met in Tahrir Square a couple months ago was killed yesterday in the clashes. Shehab Ahmad was 25 years old, and I had hung out with him and talked politics once or twice in Tahrir. I hardly knew him, but it was chilling checking out his Facebook profile after I learned of his death: Someone had posted a photo of a pile of corpses in Tahrir—and had tagged him in it. I've uploaded the photo (it's graphic) to my Twitter feed. He appears to be wearing the same shirt he had on when I took this photo of him back in September. 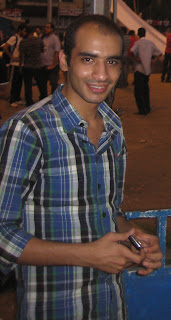 Also this evening, I accompanied two friends who wanted to donate blood to a hospital a few kilometers south of Tahrir. The blood bank received a relatively steady stream of people while we were there—mainly Egyptians but some foreigners, too—but it definitely wasn't overwhelmed by donors. A worker at the hospital, called Qasr El Aini Hospital, told me they had received some injured people from the clashes.

It's difficult to discern the potential effects of the fighting, since developments are rapidly unfolding. Egyptian Prime Minister Essam Sharaf and his cabinet reportedly submitted their resignation tonight, but the ruling Supreme Council for the Armed Forces (SCAF) apparently rejected it. Parliamentary elections are still scheduled to begin a week from today, although I seriously doubt that'll happen. It's hard to believe that Egypt will be able to hold credible elections when the very police that are supposed to guard the polling stations are currently fighting Egyptians in downtown Cairo.

What'll happen in the next few hours and the following few days remains to seen, but my guess is that the police (if they're smart, which they have yet to prove) will pull back from directly fighting the protesters, while the SCAF will make some larger concession about a timetable for relinquishing power sometime in 2012. Then things will die down in and around Tahrir, and the average Egyptian will be happy that a degree of stability will have once again descended on Egypt. Most Egyptians I've talked to, by the way, are confused and angry about the violence but don't necessarily agree with the concept of continued protests, as they just hope for a return to stability and more prosperous economic conditions. Elections might still take place on time, but with decreased turnout because of fears of election-day violence.

Or everything could spiral out of control. All it takes is an iconic image of a child killed by the army in Tahrir, or a particularly bloody day of clashes, to sway public opinion in favor of the demonstrators. We'll see.

One last note: I've said this before, but it's absolutely incredible how localized the fighting is. I live five minutes away, but all the stores are open and people are out and about. Life goes on unless you're right downtown. Even a few blocks away, I hear, you often can't really tell that anything unusual is taking place right down the street—that is, unless the winds shift and a cloud of tear gas floats your way.

As always, for updates, follow me on Twitter @bgittleson, and check back here for updates.
Posted by Ben Gittleson at 4:13 PM