'In Tahrir Square, it's January again'

My day today consisted of frantically following Twitter from the moment I woke up until now, around 1 a.m. in Cairo. My classes took place at the same location they did yesterday, in a leafy neighborhood called Zamalek located on an island in the Nile River only about a 10 minute drive from Tahrir Square. I felt worlds away from the fighting, as people went about their daily lives and relaxed in the community's chic cafes.

Clashes in downtown Cairo, though, and specifically right near the American University in Cairo campus where my classes are normally held, continued full steam as protesters kept up their fight against police on a street off of Tahrir. About 45 minutes before my last class was scheduled to end, the director of my program knocked on our door and told us to head home ahead of a citywide curfew called for 3 p.m. It turns out that curfew was just a rumor, but they also dismissed us so we could avoid anticipated traffic congestion linked to the "million-man" march/sit-in planned for earlier this evening.

Just as we arrived in our neighborhood, a large group of school kids marched by in the direction of Tahrir. Chanting slogans and singing, the kids had smiles on their faces and waved Egyptian flags. "Join us!" one urged. 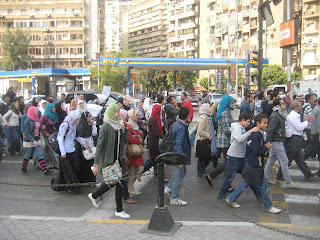 I sat with friends at home most of the afternoon and evening glued to Twitter and the television. We saw one or two more marches go by with young people headed downtown.

Around sunset, we decided to check out the view from the roof of a hotel closer to the square, on the bottom of the same island that is home to Zamalek. On our way, we walked near a much larger march of a couple hundred people on their way across the last bridge to Tahrir. Cries of "Freedom!" and "The people want the fall of the field marshall" filled the air. Egyptians young and old streamed past us in the other direction, their eyes teary and faces covered with yeast, which the protesters have been using to counteract the tear gas's effects; many wore face masks, and some had gas masks hanging around their necks.

Throughout the evening, I learned that many of my Egyptian friends and acquaintances made their way downtown, including one friend who's hardly interested in politics. On Twitter and in person, Egyptians explained how today's Tahrir felt like the Tahrir of the uprising in January and February, when the square looked less like a traffic circle and more like a sea of people packed shoulder to shoulder. Newspapers this week certainly shared that view.

Nearly every Egyptian friend we spoke to urged us Americans to stay home. Xenophobia is on the rise in post-Mubarak Egypt—conspiracy theories about foreign intereference are ubiquitous in the Arab world in general—and the last thing many protesters want is for foreigners to come to Tahrir and play into the storyline that the ruling Supreme Council for the Armed Forces (SCAF) is selling, that "foreign hands" and foreign elements are behind the current unrest. News that three American undergraduate students studying abroad at AUC were arrested in Tahrir only served to discourage us more from going down.

As thousands and thousands of Egyptians continued to pour into Tahrir, Field Marshall Mohamed Hussein Tantawi, the head of the SCAF and the effective ruler of Egypt, gave a rare televised address. Using language reminiscent of Mubarak's speeches during the uprising earlier this year, Tantawi praised the army's role in society, said it never fired on civilians, and decried the media and the gloomy economy. He also promised the SCAF would submit to a referendum on immediately giving up its power, if the people call for it, and agreed to fully transfer power to a civilian president before July 2012. Parliamentary elections will still start next Tuesday, he said. Wrap your head around that one.

It remains to be seen how Egyptians will react to Tantawi's speech and concessions. Since the speech, fighting in the streets near Tahrir has only intensified, with some tear gas entering the square itself and a number of protestors complaining that the gas used feels stronger than the norm. Clashes are taking place in Alexandria, too, and I've heard reports of demonstrations in other Egyptians cities.

I'm off to bed, but please continue to join me on Twitter @bgittleson, and let me know if you have any questions. We'll see how Egypt—and Tahrir—react to developments throughout the day tomorrow.
Posted by Ben Gittleson at 5:06 PM