All the lonely people 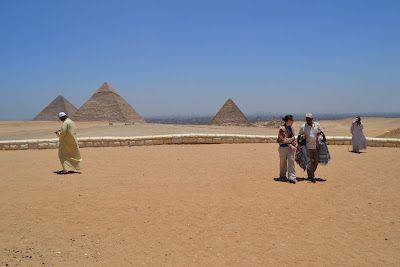 An unfortunate victim of the revolution has been Egypt’s tourism industry, which has in the past accounted for around 5 to 10 percent of the country’s GDP. Nowhere is this more evident than at the great pyramids of Giza themselves, which I visited today with a group organized by AUC.
Anyone who has been to the pyramids remembers the extremely annoying touts selling everything from crappy plastic pyramids to crappy t-shirts and crappy stuffed camel toys, aggressively plying their wares to tourists from all over the world. The touts came out in force today, too, but they had way fewer victims to harass. At the height of morning visiting hours, the plaza by the pyramids was largely empty, save for a busload of Russian visitors, the American students in my group, and a smattering of others. It was incredible – when my parents and I visited last year, you had to push your way through people to see the Sphinx up close, but today the 26 of us made up a significant chunk of the people there. 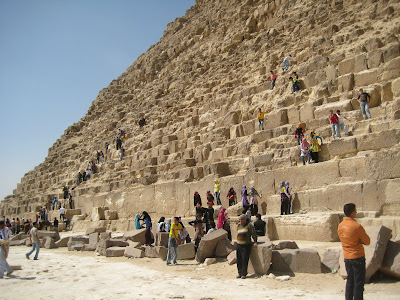 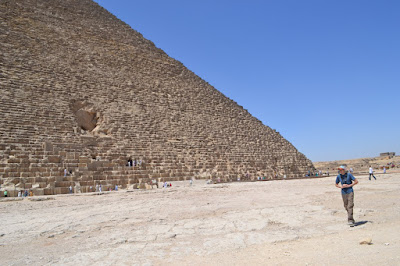 … and after.
Egyptians who rely on tourism for their income have been hit hard, and it was difficult not to feel sad even for the annoying jerks who follow you around on their camels begging you to hop on and take a photo for a price. “I give you Egyptian price, not tourist price,” one of the jerks told us, “because there are no tourists here.” It was sad – that is, until he ruthlessly attacked another tourist nearby with a t-shirt and wooden Sphinx model.
Still, I felt lucky to experience the pyramids with hardly anyone else there. How often does one get to have a wonder of the world almost entirely to himself?
P.S. This is possibly the funniest interview I've ever read: Q&A with Egypt's Gladiator: Fight with Lion still on! An Egyptian guy is trying to promote tourism by fighting a lion in a cage match, but he's instead provoked international outrage:

Essawy: This will be my first battle with a lion, yes. I have fought other animals, mainly dogs. On separate occasions, I have fought three of the most ferocious dog breeds.

Essawy: I punch and kick them.

Posted by Ben Gittleson at 2:34 PM