The Revolution in My Backyard 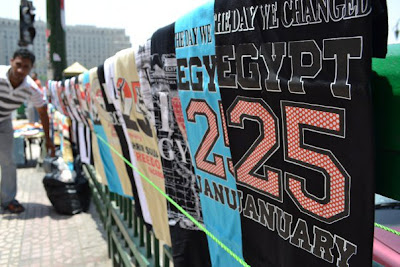 It’s not often that one gets to live where a revolution just took place (and is arguably ongoing), and it’s even rarer to go about one’s daily business right next to that uprising’s epicenter. But that’s just where the American University in Cairo (AUC) is located—literally bordering Tahrir Square—and I’ve been spending my days taking it all in, talking to Egyptians in my limited Egyptian colloquial Arabic and hoping to better understand how the “New Egypt” is faring. 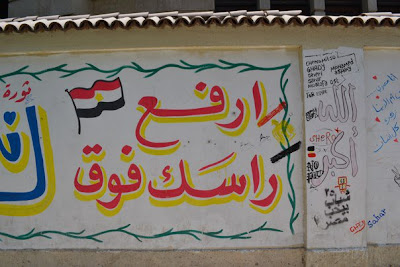 “Raise your head up,” reads some graffiti by the entrance to the AUC campus.

Most Egyptians appear to share the notion that the majority of the country suffered under Mubarak and that it’s good that he stepped down from power. Mubarak’s name has quickly disappeared from a host of places around Cairo, including his eponymous Metro station, which has since been renamed Martyrs Station. Even the few upper-class people with whom I’ve come into contact say they’re happy Mubarak is gone, even though they conceivably benefited from the previous regime.

Beyond agreement over Mubarak’s exit, though, I get the sense there’s very little unity in thought with respect to how the country should proceed. It’s possible people like to talk about the past because that narrative is so black and white while current times are so unclear. The larger issue, it seems, however, is that corruption still exists, the economy is still bad, people are still out of work, and the personal security situation has gotten somewhat worse, with so-called “thugs” on the prowl (the “thugs” thing might be a bit trumped up, though). So people are beginning to realize that despite the very visible court trials of some former officials—and Mubarak’s upcoming trial—the revolution has yet to conclude. 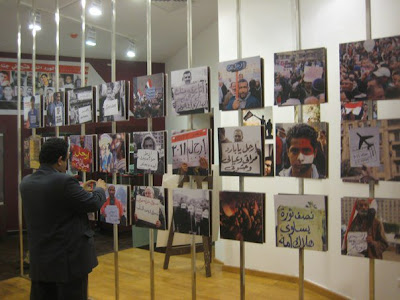 A photo exhibit at AUC documents events that occurred at the university’s doorstep only four months ago.

Signs of the original 18 days of protests are everywhere, as are hints of ongoing political tension and demonstrations. From posters in the Metro station commemorating those who died in the revolution, to graffiti outside the walls of AUC, it’s thrilling to see how Egypt is reeling from both its newfound freedoms and emerging internal and external tensions. Perhaps most promisingly for the economy, Egyptian companies and entrepreneurs alike have responded robustly, with ads praising the Egyptian people and apparel commemorating January 25.

And every young person I’ve met so far says they were in Tahrir during those 18 days—that is, except for one new friend who was in the army in Alexandria who called the revolution a very tough time to be in his position.

On first look, then, the initial tide that united Egypt in revolt does not appear to have totally receded. But post-January 25 Egypt seems like it’s certainly a very tough place to be a citizen. 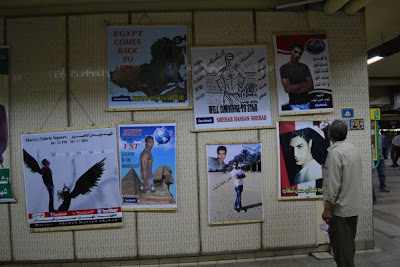 Posted by Ben Gittleson at 3:06 PM