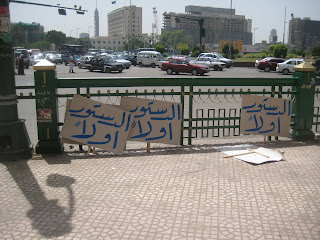 Signs in Tahrir Square call for "the constitution first."
Egypt held its first free and fair vote in many, many years back in March, when Egyptians overwhelmingly passed a constitutional referendum that set presidential term limits, changed the election law, and stipulated that parliamentary elections should precede the drafting of a constitution. My professor told us that everyone was giddy that day; people took photos of their dyed fingers showing they had cast their ballot.
Now, three months later, many liberals continue to demand that a constitution come before parliamentary elections. Many of them fear that the Muslim Brotherhood and other religious parties will meet with success in this fall’s elections, threatening the possibility of penning a more liberal, secular constitution. Protesters frequently call for “ad-dustur awwalan” – “the constitution first” – and a political movement has even said that it has gathered 3 million supporters’ signatures. A major protest called for two weeks from now was originally centered around that idea and may still be.
My friend Galal, who fought his way to Tahrir on the bloodiest days of the revolution, is a liberal who is adamant that a committee of legal experts and others should draft a constitution now. If I were in his position, I’d probably feel the same way – having risked my life fighting for certain ideals, among them a secular state based on social justice and liberal values, it would feel like the Muslim Brotherhood was stealing the revolution from me and other young people.
In many ways, the liberals’ rejection of the outcome of a democratic vote – not a very good precedent to set, if you ask me – is indicative of their failure to mobilize grass-roots support and organize well in the post-Mubarak era. They’ve formed dozens of parties and even more political groups, yet they appear fractured and reactive. The Muslim Brotherhood and other Islamic groups, on the other hand, have been out campaigning, organizing, forming coalitions, and capitalizing on their decades-old, broad social service networks. A very likely reason why liberals are pushing for ad-dustur awwalan is to push off parliamentary elections and give them more time to grow their parties and compete more vigorously with the established groups, like the Brotherhood.
These are heady times in Egypt. Its not often that a country of 80 million people gets to write a constitution, and they better be careful to produce a document representative of will of the Egyptian people. Otherwise, post-revolutionary Egypt could become politically deadlocked, or worse.
As a member of the Iraqi parliament told me and a group of my friends the other day (next blog post!), Egypt better not rush it with its constitution like Iraq did. Otherwise, Egyptians could be tweaking the document many years down the road, struggling with an imperfect system that doesn’t accurately reflect the desires of a cross-section of society.
With their rejection of a democratic vote and rush to write a constitution, the liberals better be careful what they wish for.
Posted by Ben Gittleson at 1:10 PM