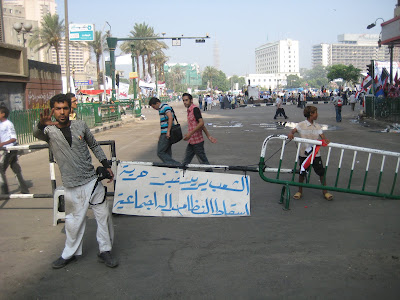 Tahrir Square remains shut down today, which made our four-minute commute to school slightly more complicated, as we normally get out of the taxi right in the traffic circle.

Instead, this morning we exited the cab just before a civilian-run checkpoint on a main road leading into the circle. A line of young men greeted us, inspected our university ID cards, and searched our bags. In the past, I've been subject to two or three ID checks at the same checkpoint, as well as two or three pat downs and bag-checks.

No members of the police or military force can be found anywhere near Tahrir, and protestors have organized checkpoints like this one at all entrances to the square, including subway station exits. The volunteers' aim is to keep out weapons and the "baltageya" -- thugs supposedly on the payroll of the police and other elements perceived as unsavory. Their concerns are well-founded: On a number of occasions over the past few months, small clashes have broken out after a few troublemakers provoked the crowds.

The checkpoints are the most effective and thorough security I've ever been through in Egypt, where metal detectors are present in hotels, banks, and other building but are rarely utilized. Usually, foreigners walk through security checks with little more than a passing glance.

This time, though, many demonstrators have become distrustful of foreigners and suspect they might even be spies. Particularly since the government arrested an alleged Israeli spy last month, protestors have come to fear foreign interference with their revolution. At one point on Friday, a man approached us because he heard us speaking English; he asked to see our IDs and only left us alone when our Egyptian friend told him that we were with him. Anticipating problems like that, I had left my camera at home that day.

This morning, we exited the square through another checkpoint, as seen in the photo above. It's not clear how long the sit-in will continue -- just yesterday, the protestors succeeding in shutting down the Mogamma, a massive Soviet-style government building that symbolizes Egyptian bureaucracy and sits adjacent to Tahrir. Judging by the persistance of the protestors and calls for another large demonstration tomorrow, it looks like the checkpoints might become a fixture of our daily commute for at least a few more days. 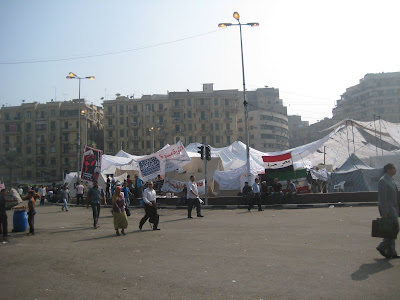 A tent city occupies the center of the square. The lack of traffic in Tahrir is a bizarre sight.
Posted by Ben Gittleson at 8:21 AM