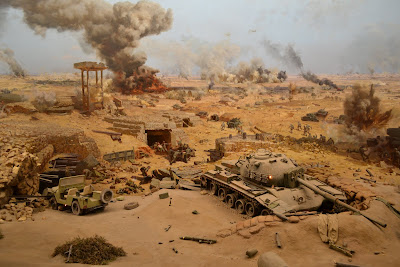 "Our heroes had recorded history therefore it is a must to record their struggle. ... During President Mohamed Hosni Mubarak's visit to the Democratic People's Republic of Korea [North Korea] in 1983 he agreed with the Korean President Kim IL Sung that Korean technicians would help construct a monument to honor the great October Victory, the heroic deed of the Egyptian people and their brave sons of the Armed Forces. [O]ur gratitude to martyrs -- Our gratitude to heroes." -October 1973 War Panorama ticket

The fact that North Koreans designed the October 1973 War Panaroma/Museum, where Alex and I found ourselves last week, should've been the first sign that the institution might not live up to the high academic standards one might normally expect from a museum.

The building, which consists of a series of halls and displays centered around a 360 degree, painted panoramic diorama of epic fighting during the October War -- known in Israel as the Yom Kippur War -- glorifies Egypt's performance in a conflict that it basically lost. In short, on Yom Kippur 1973, Egypt and Syria launched a surprise attack on Israel and actually did pretty well the first few days. But then Israel rebounded and beat back Arab attacks. The museum, of course, focuses entirely on the first few days; a similar museum, also connected to North Korea, exists in Syria. 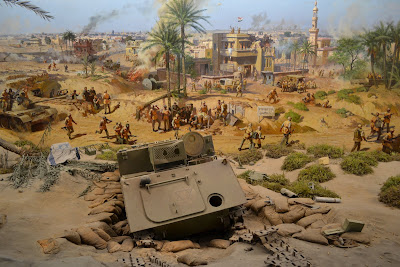 Many landmarks in Egypt take their name from this October "victory," which did, in fact, have a very positive impact on the Egyptian psyche after the country's loss in the 1967 war, or Six-Day War. 6th of October City sits on the outskirts of Cairo, and 6th October Bridge is a major artery over the Nile.

Every side has a right to portray its own version of events, of course, but what was disconcerting about the museum was the fact that pretty much the only other visitors that day were a large group of schoolchildren who laughed and clapped when paper Israeli planes were shot down by glow-in-the-dark Egyptian military vehicles during one of the presentations. The Arab-Israeli conflict is rife with differing, incomplete narratives, and it was almost frightening to see kids so early on being schooled in one such -- particularly militarized -- account of a key event in modern Middle Eastern history. 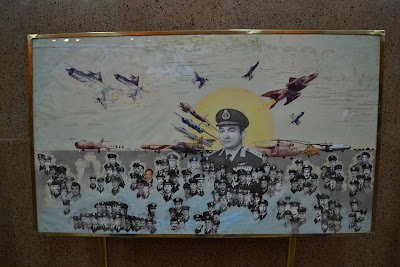 Even after his downfall, Mubarak and his face still grace posters and displays in the museum, which is run by the military. 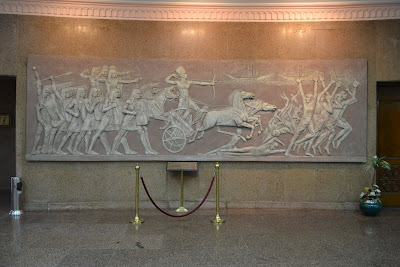