From Sudan to China 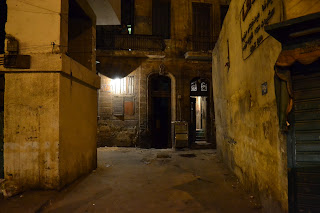 While I don't feel like I've gotten a good feel for Egyptian food -- other than street food like shawarma and ful (like refried beans), and some other tasty, fried things -- over the last couple weeks I've been lucky enough to sample the cuisines of other exotic locales.
A little while back, a group of students from my program ventured to a tiny Sudanese place in downtown Cairo. It was the definition of hole-in-the-wall. You had to walk down an alley, hang a left, maneuver around some trash, and there it was, unmarked and packed with Sudanese people grabbing a bite to eat: 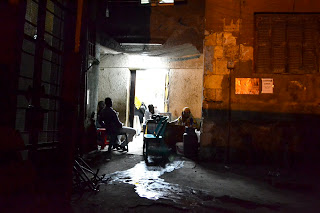 Under photos of Sudanese politicians and fans blasting warm air throughout the modest establishment, we enjoyed a bunch of stew-like dips -- lots of vegetarian stuff, but also meat and chicken dishes -- as well as fried fish and thin, sticky bread that you smother in a delicious, peanuty sauce. The second time I went back, we dined with a Sudanese journalist based in Cairo and a Sudanese man who sold bathrooms or something. Unclear. I was focused on the food.

Sudan was kind of boring, though, so we decided to hop on a plane (read: take a taxi) and check out a pair of Chinese restaurants we had heard about. But these weren't normal Chinese restaurants -- they were run by Uighurs, a Turkic people who live in northwestern China and are heavily persecuted there by the Chinese state. My understanding is that the Uighur restaurants, in a very sha'abi (lower class / "authentic") neighborhood, particularly cater to the Muslim Uighurs who study Islam in Cairo.

The employees speak little Arabic, and the menus consist of photo albums with pictures of the dishes with no explanations. After consulting with people at a nearby table and perusing the pages of the most delicious photo album I've ever seen, we ordered some Uighury dishes. Mine was really tasty -- noodles, veggies, beef, etc.

So we'd be prepared to ask for the same dish the next time we came, we whipped out our notebooks at the end of the meal and asked our waiter what the dish was called. We stood with our pens at the ready, anticipating some complicated Uighur name.

"Your dish," the waiter said, "is called chow mein!" 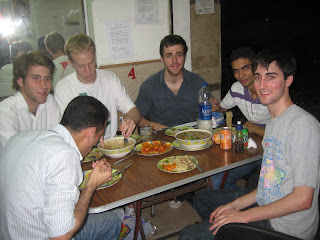