After a long Ramadan of somewhat lackluster protests that were particularly hampered by the violent breakup of the Tahrir Square sit-in in early August, demonstrators returned to the square yesterday under the slogan "Correcting the Path." I stopped by the rally in the late afternoon and was surprised at the decent turnout, particularly after conversations with Egyptians over the last week or two had revealed a sense of weariness with continued protests.

This time, though, tons of hardcore soccer fans bolstered the demonstrators' numbers; violent clashes between fans and police after a game this week had spurred the fans on to participate yesterday. The hooligans, if you will, are called "Ultras," and they creatively turned some of their well-known chants and songs into anti-Ministry of Interior and anti-Mubarak chants.

A little later at dinner in a quiet neighborhood a few blocks away from Tahrir, my Egyptian friend got a call informing him that another protest in front of the Israeli embassy a couple miles away had turned ugly, as police started beating back protestors who tore down part of a newly built concrete security barrier around the residential building that houses the Israeli embassy. On our walk back to Tahrir, we passed groups of young people clad in Egyptian flags hailing cabs to "assifara alisra'iliya"—the Israeli embassy. 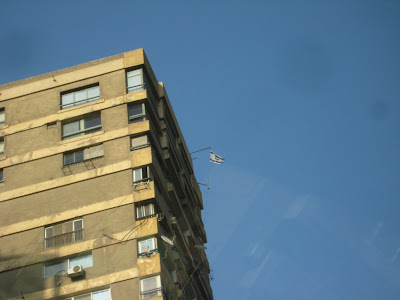 The embassy back in June. It occupies the top floors of a residential building overlooking the Nile.


Egyptians have been demonstrating outside the embassy for weeks now in respsonse to Israel killing five Egyptian soldiers while pursuing gunmen across the border following a terror attack in southern Israel that left eight people dead. Among their demands are that the Israeli ambassador leave the country and the embassy shut down.

Back at home on my awesome roof above the streets of Dokki—a neighborhood kind of between Tahrir and the embassy—we saw dark smoke rising against the night sky, coming from the direction of the Israeli mission and a nearby police station we heard was on fire. The sound of sirens filled the air, and we began to see protestors running down a street near our building in the direction of the embassy.

But the protestors seemed to have been turned back at some point, and all of the sudden we saw 50 to 100 black-clad riot policemen marching down the street. We live right by a relatively quiet police station, and it looked like that was where they came from. The policemen banged loudly on their shields as they made their way toward the embassy. It was an eery sight.

Next, we heard from friends who live a bit closer to the embassy that they inhaled some tear gas as they stood on their balcony listening to Molotov cocktails explode from a few blocks away. I fell asleep following the developments on Twitter.

All in all, reports said the riot at the embassy left a few people dead and hundreds injured. About 30 protestors reportedly made it up into one of the lower floors of the embassy itself, throwing down hundreds of documents in Hebrew, Arabic, and English. The falling white documents reminded me of my first snow day in Cairo.

Israel ended up evacuating nearly all of its 80 diplomatic staff in Egypt, including the ambassador and his family, according to reports. Egypt declared a state of alert, and the prime minister and his cabinet might tender his resignation this afternoon.

It's amazing how quickly things can blow up. While I doubt popular anger at Israel will translate into another uprising, last night's events leave one to wonder what type of incident could actually set off a new set of mass protests in Egypt, igniting the tinder box of popular discontent at the ever-deteriorating economy and political process.

As Egyptians are fond of saying, "Rabbina yestoorna"—may God protect us.
Posted by Ben Gittleson at 6:29 AM