Snail down! Repeat, snail down! 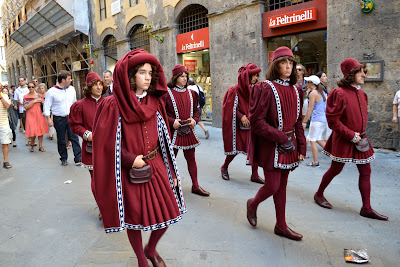 Beads of sweat dripped from the tip of my nose, whizzed through the air, and hit the sizzling cobblestone with a splash. I wiped my brow with a red, yellow, and blue bandana, decorated with a picture of an intimidating snail on the front. I watched my perspiration vaporize upon hitting the ground.

That morning, we had boarded a bus chuck-full of Australian backpackers looking for exactly what we were: a medieval, violent, Bacchanalian horserace that we had no hope of fully comprehending. Four hours later, it seemed like we might evaporate ourselves before witnessing the most majestic equine-friendly tradition Tuscany has ever known. 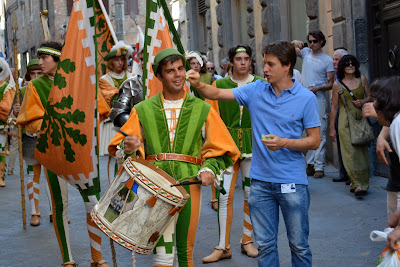 Not all is fun and games, though, as townspeople have a history of drugging each other's horses or beating up jockeys just before the competition. Pushing, shoving, and smacking throughout the race itself—with jockeys making alliances to assure the defeat of rivals—elevates the Palio and its boisterous awesomeness to a league of its own.

After trial runs in the lead-up to the big day, townspeople from the different contrade, sporting symbols like dragons, the forest, or a she-wolf, don medieval garb and march through the town's circuitous streets. Singing children and flag-bearers lead their neighborhood's parade to a church, where a priest blesses the contrada's horse and wishes it good luck.

The benediction of the horse is seriously serious—"a particularly delicate and sensitive moment," our tourist pamphlet warned with not hint of sarcasm. "[D]uring the presence of the horse in the church, ABSOLUTE QUIET IS REQUIRED." Images of a drunken Australian mounting a sanctified steed flashed through my mind.

Back in the main square, an absurdly long pageant complete with gratuitous amounts of flag tossing ended when 10 horses, 10 jockeys, and zero saddles emerged on the clay-covered course and trotted up to the starting line. I readjusted my sweat-covered bandana and looked down at the picture of the long-necked, determined snail staring back at me.

The second we had seen the snail earlier that day, we knew that that contrada was our contrada. Come on, a snail competing in a test of speed? Taking cues from a Chinese restaurant placemat, our pamphlet had informed us the snail's enemy was the no-less-ironic tortoise.

"Go snail!" we screamed among 30,000 tourists and locals packing the square, leaning forward and sweating on each other with bated breath.

While the race lasted less than 90 seconds, the course's two straight-up 90 degree turns did not disappoint. On the last lap, a two- or three-horse pileup sent jockeys flying everywhere, and a couple horses finished the race without a human on top (completely allowed). But looking closer, we discovered—oh no!—the snail horse had crashed!

The Palio hooligans left us no time to sulk, however, as throngs of young and old Sienese rushed the course, picked fights with each other, and mobbed the winning jockey, who hailed from the giraffe contrada. Stupid giraffe.

Our day witnessing living history ended with a night of raucous party-crashing, pizza-eating, and piazza-storming as we wandered the serpentine Sienese alleyways (ok, maybe more pizza-ing than partying...).

Throughout the day and into the evening, the seriousness with which the Sienese approached the Palio kept throwing us for a loop. At one point after the race, Justin swore he saw a teenage boy sitting on the side of the road in the elephant contrada, slumped over and crying into his hands. A sense of defeat enveloped people in a nearby bar, where Italian television broadcast footage of the race on repeat.

Meanwhile, the giraffe contrada was livin' it up. Bells rang loud, kids rapped on drums, and the prize of the Palio—a giant silk banner—hung in the neighborhood's main church.

Good for them. There's always next year, though. Or the 353 years after that.
Posted by Ben Gittleson at 7:03 PM